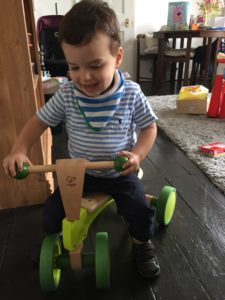 iding it around himself! It’s so adorable! Rafael loves controlling the little handlebars and pushing himself around the house. He’s still getting the hang of it (it’s made for kids a year and up, but so far Rafa hunches over the handlebars and pushes himself around rather than sitting back and using the whole seat), but he loves zooming around the corridors on his own set of wheels! I’ve written quite a lot about Hape and how some do the range has become Rafa’s firm favourites. The brand create beautiful wooden toys which I thought may not be top of the list when faced with plasticky bright toys, but they are definitely some of the most played with! Buy Hape’s Scoot Around Rider for £45 here.