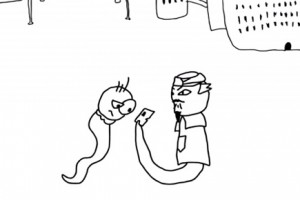 A QUIRKY music video that’s a featuring sperm and the Karate Kid may sound gloriously off-beat…. and well, yes it is.

It’s the latest clip from Catfish and The Bottlemen, for their new single Rango.

Here at Pillow HQ, we adore the loveable lads from Llandudno. They are a four-piece currently living in front man’s Van McCann’s parents B&B, and most likely wreaking havoc there. They are still young and wild.

We’ve been championing them since our exclusive chat with the band and now Radio 1 DJ Zane Lowe has named their new track his Hottest Record in the World!

We’re starting to love them even more after their new single – if that is even possible?!

The video is a little different to the usual rock/indie stereotype. Firstly, it’s an animation. Secondly, it’s a mix of Karate Kid and… sperm.

That’s right, the journey – or rather, the race – of the sperm to the egg is the exact storyline of the latest video.

The genius idea is comedic and a juxtaposition with the bittersweet lyrics of the song.

McCann wrote it about his first girlfriend after they had just split.

“It’s about how our shitty small town wore us out a bit – everyone knowing our business, and wanting to be involved in it a bit more than we did.”

Having been tipped off as “stadium ready” by John Kennedy at XFM and played a set at this year’s Reading and Leeds Festival, plus nearing 5k Twitter followers, there’s no doubt in our mind that these boys are going to be centre stage very soon.