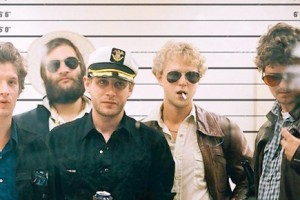 It is a suitable title for the new record as it takes a solemn, dispirited approach. Frontman, John McCauley, has dubbed Negativity as the “evil twin” of their debut.

Recently, Rolling Stone premiered The Dream’s In The Ditch which is the second track to emerge from the new LP.

This track is one of the more upbeat songs on the album with strong drum beats and powerful vocals. However, the thesis of the song follows the crestfallen criteria of ‘Negativity’.

New single The Rock was released last month and is available to buy now.

Negativity is McCauley’s most personal work. After a whirlwind of a year during 2012 – with a family member going to prison and a collapsed engagement – McCauley channeled all of his negative emotions into his music which resulted in a glorious and mature collection of songs: some of his finest work.

The latest album includes tearjerkers, heart wrenchers, and genuinely emotional songs including Hey Doll, and In Our Time which features vocals from Vanessa Carlton.

For Deer Tick, Negativity is a hard one to beat as it is fist-pumping and life-affirming for the Deer Tick’s lovers worldwide.

It is a defining collection from a band who believes and follows the rock ‘n’ roll’s steps of the power of redemption and transcendence.

Not ones who are unfamiliar to the stage – the band spends at least 100 days per year on tour – Deer Tick will be in London, Brussels, Amsterdam and Berlin within the first four days of October – blimey!

Negativity will be out 30th September.