DOG is Dead were still sitting their A Levels when they decided they wanted to make music for the masses. In an interview with the fresh faced five-some from Nottingham they discuss signing with a top record company, playing those all-important live shows and piecing together their debut album.

Having only started performing in 2008 their popular debut EP Glockenspiel was released two years later. They describe their sound to me as “big pop music with a choral edge” and that couldn’t be more accurate. Their vocal harmonies are breathtaking adding drama and a full sound to their indie pop vibe. The maturity in which they play their instruments (including a sax thrown in for good measure) sounds like the band have been making music for decades.

“We’re into a bunch of things like grunge and psychedelia to pure pop music.” Being a new band on the scene they have been compared to a number of musical talents. Dog is Dead employ the laid back cool energy of The Rumble strips, Mystery Jets and The Police where slow harmonious vocals would be followed by a burst of saxophone bringing up the tempo. The release of River Jordan earlier this year is also an interesting sound-alike of Fleet Foxes and Foals. Due to release music later this year via Atlantic Records the band feel privileged to be part of such a label.

“To be apart of Atlantic Records is a big deal, and humbles us in some ways. Being linked to so many amazing and successful artists puts us in perspective and gives us something to live up to, and to aspire to.”

With five members in the band all wanting to contribute, their way of writing seems to coincide with the feel of their music.

“Agreeing on the fine details can sometimes be difficult as we’re all quite strong-minded. But to be honest there is never really any problems between us, or with recording our material. We’re pretty laid back about it!”

After numerous successful single releases and an acoustic EP drawing in support from across the country their debut album is on the horizon.

“To be recognised as successful artists is really important to us. But also to make a living out of something to love doing is also a huge part of it. We’re just making the most of it while it lasts, and a successful album would only help us on our way.”

Performing live in front of a crowd is the most important thing to a band, especially for a new band who want to project their music into everyone’s ears and give them a taste of what they’re all about.

“Touring is important for any band, and we’re just the same. Obviously the press is important, as well as radio play but no-one really seems to believe the hype until they’ve seen you play. And its maybe one of the most fun things to do in the world, ever! When we do perform, we try to bring as much energy to our performance as we can. An interesting performance is much more enjoyable to watch, so we try and bring new ideas to the stage with us.”

After touring with bands such as One Night Only, Cajun Dance Party, Local Natives and Mumford and Sons, it’s the local shows and festivals like Splendour that bring it all back home for the band.

“Splendour was incredible, the home town support was thrilling and only filled us with more confidence for the show.”

Dog is Dead are currently on an extensive tour with Bombay Bicycle Club until the end of October when they finally get their name at the top of the bill and play some of their own headline shows.

Confessions (acoustic EP) is OUT NOW. 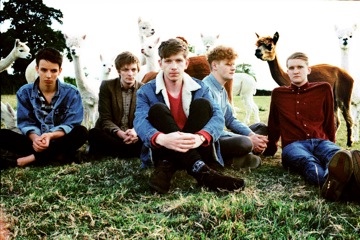