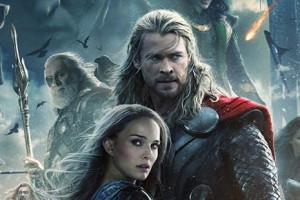 AS part of Marvel’s “Phase Two” effort (including the forthcoming Captain America and Avengers follow-ups) comes the sequel to the Kenneth Branagh directed 2011 film Thor.

Whereas that first entry opted for the tone of a lofty Shakespearean family drama in the kingdom of Asgard crossed with an awkward fish out of water comedy on Midgard (I mean, Earth…) for the titular character, this time it’s all a bit more straightforward. The worlds and the characters have all been established and its now just up to villain Christopher Eccleston and a potentially universe destroying macguffin called the Aether to kick the story in motion.

The first noticeable thing is how much more ‘sci-fi’ everything is. The opening battle is like a cross between The Lord of the Rings and The Chronicles of Riddick and there are several scenes later on that are reminiscent of the Animatrix episode ‘Beyond’, where kids discover that the physics in an abandoned warehouse has seemingly gone out the window. It’s a little jarring to see sword fighting and flying hammers mixed up so readily with lasers and spaceships but the whole film seems so committed throughout that you just come to accept it. After all, the Arthur C. Clarke quote “magic’s just science we don’t understand yet”, did feature prominently in the first film.

So it’s less fantasy and more space opera – and in that regard it all looks amazing. The production design is top notch and could even be the best-looking Marvel film to date. Asgard is always breathtaking to behold and, in a seemingly direct contrast, the majority of the scenes on Earth are filmed in good old (if a little grey) London.

Visually, Thor is stunning – but the story is a little bland and predictable. Praise be the gods then for Tom Hiddleston (as the is-he-or-isn’t-he villain Loki), who easily steals every single scene he is in. The brothers’ complex love/hate relationship with each other is one of the most compelling parts of the story – more so than the one between the ‘god of thunder’ and regular Earth girl Jane Foster (Natalie Portman), which still seems a little forced and unlikely.

Perhaps taking its cue from the success of The Avengers, there are also frequent comedy moments and throwaway one-liners scattered throughout the film. On their own they work, but they often fall foul to bad timing contextually which can somewhat undermine the integrity of the film. When Loki is wisecracking in the face of danger that’s fine – it’s perfectly in line with his character. But when Thor does it when he is supposed to be in mourning or in the middle of a raging battle to save the earth, it takes you out of the drama a little too much.

Still, it’s good to see almost everyone returning from the first film as well as various nods to other Marvel franchises. Eccleston is always reliable as a villain (although he is almost unrecognisable buried under all that make-up) and the final battle is all kinds of chaotic and silly fun – characters warping all over the place as they duke it out.

It’s certainly not the best of superhero films, but Thor: The Dark World is a decent enough romp to keep you entertained until the next one comes along.