SO WHAT is the meaning of the lyric, âIâm in this shit to make the bitches love me?â I ask Scoundrels, a cheeky set of blues-loving boys, prior to their release of new album, âare you really in the music biz just to get with the ladies?â

The band erupt in laughter. âI thought we got rid of that! I thought we had to change it!â

After being told that it was cut from the radio edit, singer Ned hastily justifies (read: Lies), âErr, that isnât from my perspective, itâs from someone elses!â

But has it worked? I ask him, not letting him off the hook.

âErr, no,â he laments and the band all laugh once again.

Rock nâ roll band Scoundrels â Ned, the excitable vocalist, George the dry-witted guitarist, Billy the heavy-metal-inclined bass player and Josh the quieter member of the group who smashes it out on the drums â are full of excitable energy, willingly jumping onto each others shoulders to try and fix a light in the studio prior to an exclusive studio session that they perform for Pillow, and itching to play their instruments.

âThe album was recorded last year when we were sent out to live in Louisiana and work also in Chicago with Steve Albini,â Ned explains.

The boys recently filmed the video for Gulf of Mexico – the first release from their new album. âItâs about a busker who is upset with life and pissed off and loads of crazy things happen to him when heâs busking in Covent Garden and he just gets bored of his life and thinks âactually sod itâ, Iâm going to get on a small rowing boat and row 7,000 miles to the Gulf of Mexico. My brotherâs the actor in it and we had little cameos in it,â Ned explains.

âWe also had a Pop Idol style dance crew called One Love; we had the Britney Spears mics and everything. George very brilliantly came up with a choreographed dance.â The band jump up and start acting out the moves and then enthusiastically show me photos.

George laments: âTheyâre ten times more likely to make money out of music, rather than Scoundrels!â

âYes! The last four years have been building up to our audition. Four years learning instruments, so we can put them down and not ever play them again,â he laughs.

âWe were all listening to blues and soul, but when you goÂ  out there it really sends home how good the people on those records thatÂ  you love were.â

Scoundrels formed two years ago, after the band that Ned, Billy and Josh were in lost its guitarist and George auditioned. âWeâd heard about him on the grapevine, he came with a huge reputation.â Ned explains.

Good or bad? I quip.

âYeah! A terrible reputationâ¦ Iâd seen the posters in the police stationsâ¦â he laughs.

The band break off and set up to perform two of their songs from the new album â the first single, Gulf of Mexico and an energetic rock nâ roll slice â Hangmanâs Lament.

After a raucous rendition of each song, the band reconvene to continue their interview, all chattering over each other and making each other laugh.

I ask them about their influences, which Ned describes as, âOld rock nâ roll records, blues records, even hip-hop,â and George adds: âOld New Orleans â50s RâNâB, The Meters, basically anything from New Orleans.â

Ned looks across at their bassist, âBilly likes Pantera, AC/DCâ¦

And adds, âI do like heavier music occasionally, but I like Fleetwood Mac, and the softer side of things.

âWe couldnât have sounded more different when I first joined the band. It was very ska-based with random reggae sections in every other song.

George cheekily adds, âYeah, I saw you guys before I joined and it sounded a bit like a shit version of The Police,â he pauses, âAnd I hate the Police!â

More laughter and Ned counters, âSo a worse version of The Police, one of the worst bands!â

One of the songs, Sniff It Up is about cocaine use, is it about anyone in particular?

âItâs just about people who use it as confidence on tap. There was an article about Daniella Westbrook, and she has no septum. Itâs just a funny concept that you can gain confidence just by having a little whiffÂ up your nostrils,â Ned says.

Surely a sentiment at odds with some of musicâs finest musicians, so what is Scoundrelâs rock nâ roll claim to fame?

The bandÂ thenÂ says something unprintable, which their manager asks me to strike from the interview.

Ned turns to Josh, and says: “You went to a party where people tasered each other in Louisiana, didnât you? Thatâs quite rock nâ roll.”

Josh laughs, âI canât remember that, I think you made that up.â

This summer, the boys are heading out to play festivals, âAnd then heading to Italy to play at Monza for the Formula One. F1 Rocks, and then weâre going on tour, back up to America, doing the East Coast.â

Ned adds, âWeâre playing Feastival. Which is Jamie Oliverâs one in Claphamâ¦â

âI thought we were doing Get Loaded in the Park?â George asks, slightly indignantly.

The boys quickly shoot down this idea. 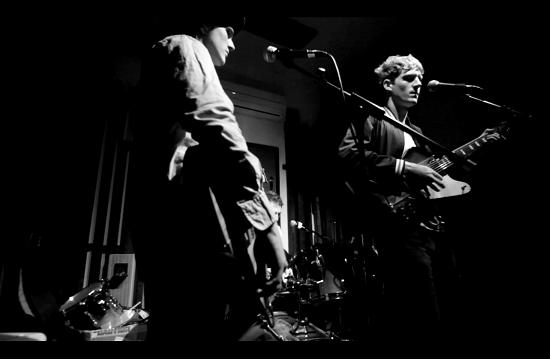 Ned, brightly, adds: Weâve got a residency at Ronnie Scottâs! We have a room there, and if anyone wants to rent it off usâ¦â

George jokes, âWeâre not playing music, weâre renting ourselves out! Tonight itâs the Scoundrels for your entertainment. Five pounds entry!â

Ned explains in a more serious tone, âWe play there once a month at Ronnieâs which is awesome, itâs a really good night. Itâs open till three.â

And as for the future, the band are looking forward to the chance to play for progressively bigger and better audiences. âEven if itâs
supporting B*witched,” Ned tells me. “Get them to reform first, and then weâll see what happens.â

Youâll have to rock some double denim, I warn them.

Ned exclaims, âI did triple denim the other day!

Scoundrels debut self-titled albumÂ is released on June 27th on Blue Horizon. Gulf of Mexico is out now. For more info on Scoundrels, click here.