NOT many people can count both Gandalf and Magneto amongst their pals – but Ross Watson is one of those people.

OK, OK so they may be the same person – Sir Ian McKellan, who played the roles in Lord Of The Rings and X-Men respectively – but it’s still something to boast about.

The man himself will be on hand to support the Aussie artist’s exhibition in Redchurch Street, East London later this month.

The art show, in support of the Terrence Higgins Trust, is a fusion of classic painting techniques mixed with a modern message and celebrates positive gay role models.

And a few familiar faces can be seen in Ross’ works including QI host Stephen Fry.

The quick-witted star features in the exhibition, having sat for the painting while filming in New Zealand in April.

The work references Vermeer’s Mistress and Maid, and includes Fry holding his iPad.

This illustrates the contrast of the changes in methods of communication over the centuries.

The subject of writing and receiving letters recurs frequently in Vermeer’s work, as does the theme of communication in Watson’s art.

Paying tribute to Watson, Stephen Fry said: “Firstly, your generosity in terms of talent and time for the Terrence Higgins trust is gift so supreme it cannot properly be expressed.

“Secondly, for me to be involved, to be inside a colour and texture world so perfectly rendered, so wittily transformed to suit me, and so accurate without being cruel, is an honour I shall never forget.”

McKellan said: “Ross Watson’s paintings are obviously the work of a master of technique.

“The conjunction of modern naturalism and classic works makes it hard to believe one’s eyes.

“His newest work is irresistible because it has been inspired by the generous nature of a concerned citizen. We admire him and wonder.”

To be opened by Sir Ian McKellen 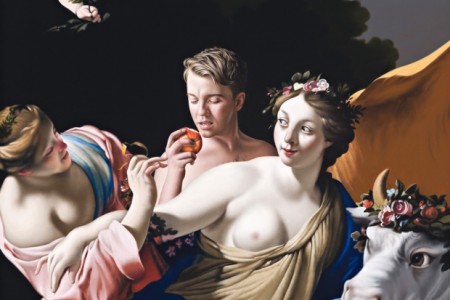 The Book Review: Wonderbook – The Illustrated…