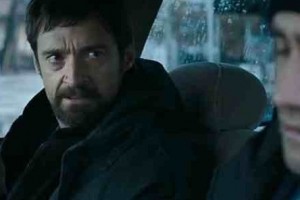 THE set-up for Denis Villeneuve’s Prisoners is zipped through pretty quickly: two young daughters of two families are kidnapped whilst their respective parents are enjoying a Thanksgiving dinner celebration.

After a fruitless search, the suspicion quickly falls on mentally challenged Alex Jones (Paul Dano). Although he certainly seems to be involved in their disappearance, there is not much evidence tying him to the case and so one of the parents (Hugh Jackman) decides to take matters into his own hand.

After the fairly conventional set-up of the genre is out of the way, it’s then that the film truly starts to darkly blossom, twisting and turning off into increasingly disturbing directions.
It’s a two-pronged assault.

On one hand it follows Detective Loki (Jake Gyllenhaal) trying to solve the mystery that is, in typical fashion, more complex than at first presented; but on the other, Prisoners is about how people deal differently when confronted with loss or extreme trauma – the main focus being on Keller Dover (Hugh Jackman) and the lengths he will go to in order to recover his missing daughter.

As such there are definite moral ambiguities and shades of grey presented repeatedly here, (bolstered by nuanced and believable performances from these two leads) and audiences are sure to have divided opinions at the end of it all about who really deserved what and whether or not certain actions taken within the film were (or could be) justified.

Gyllenhaal injects a lot of subtlety in the (on the surface) more straightforward role of the weary yet determined cop, his strange blinking habit oddly effective in conveying his restless over-thinking mind. You often get to follow his train of thought without a word of dialogue spoken.

The smaller roles also all stand out: Dano as the prime suspect see-sawing between being reviled and pitied; and Maria Bello, Terrence Howard and Viola Davis as the other parents (all of whom react differently to the unfolding events) each one bringing in solid and uniquely affecting performances.

But really it’s the Jackman show – displaying more real fury and anguish here than in any of his outings as the Wolverine, he gives perhaps the best performance of his career – a righteous man turned monster, a patriarch who thought he was prepared for anything suddenly finding himself no longer in control.

In regard to the central mystery of the disappeared girls, there are a few plot conveniences here and there (as well as the occasional conveniently timed red herring) but the masterful storytelling and tightly woven plot will likely keep you guessing right up until the end. It’s quite a rare feat for a thriller these days to be able to constantly surprise, given the modern twist-savvy cinema-going audience.

Director Villeneuve also brings a great visual style to the film. It’s beautifully shot – even when just looking at a shot of trees or during scenes of (frequent) bad weather. The editing is also economic, with frequent fade-to-blacks cutting out scenes of unnecessary melodrama or exposition. Despite the long running time (2hrs 30mins) it never seems overlong. Certainly a talent to watch for in the future.

If you can stomach some dark themes and disturbing subject matter, Prisoners comes highly recommended.