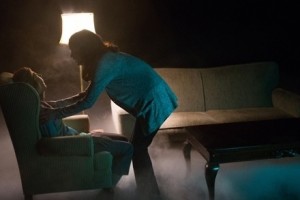 A SEQUEL to the 2010 box office hit Insidious, Chapter 2 seems to be exactly what it says on the tin: a direct continuation of the events that transpired at the close of the first film.

Instead of just doing a straight rehash however, kudos goes to director James Wan (who also brought us another of this year’s spooky flicks: The Conjuring), and writer Leigh Whannell for at least attempting to take a different tack and go some way into exploring many of the unanswered questions from the first film.

So we get to delve into the past of the is-he-or-isn’t-he possessed patriarch Josh (Patrick Wilson), find out the true identity of ‘The Black Bride’ that has been haunting him, and delve once more into the murky depths of the spirit realm dubbed ‘The Further’.

The problem is, not knowing is often a lot scarier. By introducing so much back-story and fleshing the spirits out, much of the dread-filled unpredictability that the first film fostered so well in the viewer becomes lost. Sure, there are the occasional creepy moments (a room of sheet-covered cadavers comes to mind), and plenty of the usual loud-noise accompanied jump scares, but Insidious 2 lacks the stark images of its predecessor that stay in your mind long after the credits have rolled.

Pretty much all of the original cast returns – Patrick Wilson displaying a quiet menace, Rose Byrne being terrified and/or smacked about a lot, Lin Shaye managing to live on through various contrivances and Barbara Hershey also gets a bigger role. Only Steve Coulter (as Carl, the die throwing medium) being the new addition, his method of contacting the dead offering an interesting new take on the classic but done to death use of a Ouija board.

Similarly returning with expanded roles are the two young ghost hunters Tucker and Specs – who, although starting out as being likeable enough, serve to undo much of the tension the film tries so hard to muster by breaking it frequently and inappropriately with their constant wisecracks, bickering and pratfalls. At first it’s welcome humour, but during the climax of the film it becomes distracting and groan-worthy.

Also jarring is the sudden transition to hand held digital cameras in the exploratory segments, when a group of characters investigate an abandoned hospital wing and a derelict house. It works in ‘found footage’ or the mockumentaries of the horror genre, but here its inclusion seems too out of place with the way the rest of the film is shot and presented.

It’s good that Wan and Whannell have at least tried to do something different with this sequel, whilst simultaneously carrying on the same story with the same characters and expanding the mythology. However, for every thing that’s explained (so that’s why the home security alarm went off in the first film…), more questions spring up in its place (can they travel anywhere in time in The Further? Why does a ghost need to kill people to keep living? What is it with Wan and having creepy wardrobes in his films?).

Granted there are no CGI demons scuttling across the ceiling this time around, but instead we get campy pantomime face-painted ghosts shouting at you. Lacking the genuine sense of surprise that its predecessor brought to the audience (something that went a long way in making the first film so terrifying), Insidious: Chapter 2 occasionally chills but often falters, proving that leaving things unknown can sometimes be far scarier.

It’s competent enough as a scary movie, but is slightly disappointing for those who had high hopes after the first Insidious.