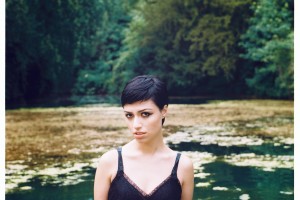 Half a decade ago, the latest teenage singer bounced out of the shadows and into the spotlight.

She had been signed three years earlier, at the age of thirteen.
She was like any other young artist – trying to make her way up the music industry ladder with an ‘individual’ voice.

In this case, it was Gabriella Cilmi with Sweet About Me.

Slowly, as industry pressures of sexualisation and contemporary dance music were thrust upon her, her music died out at the age of nineteen.

Upon the possibility of returning: Never say never. With the Australian- Italian, she has returned a completely different woman!

Now aged 21, both she and her music have matured.

First off, she wears the haircut that is all the rage with cool and quirky A-listers such as Emma Watson and Carey Mulligan.

This cool new crop is a way of shedding the skin of the younger years, making the industry and the rest of the world see them how they want to be seen: mature.

Being part Italian, Gabriella already had dark hair. Nevertheless, she has dyed it even darker, almost black, to make herself even more shockingly quirky. If we look at the culture in this day and age, we could say she is almost like a vampire with her pale skin and dark makeup.

The clothes she opts for in her latest music video (and prequel) ‘The Sting’ are black giving a dark, widow-like feel.
With regards to the sound – her music – this has changed considerably. Gone are the happy-go-lucky melodies and the extreme try of individual pop.
Now, she writes music that is deep from the heart with a sense empowerment.

Cilmi said: “I was searching for a sound that reflected the way I felt inside, which was quite vulnerable, and traumatised.”

The Sting has a mixture of influences such as Italian neo-realist photographs, old soul and 90s Bristol sound. It has a gritty feeling of vulnerability combined with a smouldering sense of sensuality.
The theme of the song is temptation and the consequences of it.

Gabriella Cilmi has grown up in the public eye. Upon returning, with her third album, she seems a lot older than her age.

She has finally found her voice.
Her new single, The Sting is out 2nd September.

The album, also named The Sting is out 28th October.