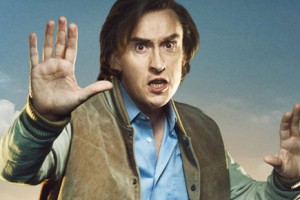 WHEN Steve Coogan’s comic creation Alan Partridge first rose in popularity through radio and TV back in the early 90s, the idea of him having his own feature film would have had been mere wishful thinking.

But as British comedy is increasingly made viable for transition to the big screen, some successfully (The Inbetweeners Movie was a smash hit) and some not (er… Keith Lemon: The Film?), it’s now not a question of whether or not they can, it’s whether or not they should.

Despite a few false starts in early years, they have finally gone through with it. So does Alan Partridge: Alpha Papa successfully carry over into a feature film? The short answer: Yes it does.

The more cynical amongst us would expect that a big screen version of Partridge would be marred by action set pieces, explosions, broader humour to appeal to a wider (read: ‘American’) audience, famous Hollywood actors thrown into the mix in ‘surprise’ cameo roles and so on. This is definitely not the case here. It’s classic Partridge – the only difference here is that the scope is a little wider and that there are, for once, actually some real stakes at the table.

When a corporate shake up at the local radio station forces over-the-hill DJ Pat Farrell into retirement, he takes matters into his own hands by holding the station hostage. Alan Partridge gets roped in as an intermediary between Pat and the police; and finding himself suddenly thrust into the spotlight again, becomes tempted to use the situation to further his own ailing career.

And that’s pretty much it. No jet-setting, no celebrity cameos – it’s a relatively contained story, and works all the better for it.

Coogan, now himself closer to the age of the character he is playing (rather than having to be made up to look older as he was in his earlier TV series), effortlessly embodies Partidge. The humour is consistently funny and the jokes are densely packed. Whether it is his gift of gab, overlong anecdotes, social awkwardness despite his play of bravado or his predilection for bad puns – it’s all classic Partridge. And yet there is not a single catchphrase uttered or any repeated jokes from his older material. It somehow all feels familiar yet fresh, even for fans that are able to endlessly quote his lines.

Even when he isn’t opening his mouth, Coogan showcases his knack for great physical comedy and as such there is barely a dull moment on screen. Familiar faces from the past also provide laughs including ‘Sidekick’ Simon, old rival DJ Dave Clifton, the ‘Work Geordie’ Michael, as well as Alan’s long suffering PA Lynn.

It’s not all just a laugh out loud comedy however. There has always been a slight touch of melancholy embedded deep within the humour and this remains intact in this film too. As well as Alan’s usual desperation to regain his former glories, Colm Meany (as the disgruntled ex-DJ Pat Farrell) has some touching moments and the film even unexpectedly manages to be uplifting towards the end.

If you are categorically ‘not a fan’ of Partridge humour and his previous appearances, then this will unlikely be the thing to convert you. But to existing fans or newbie’s alike, Alpha Papa is treat that doesn’t disappoint. It’s quite possibly the best British comedy of the year.

The question now is however, where can Alan go from here?