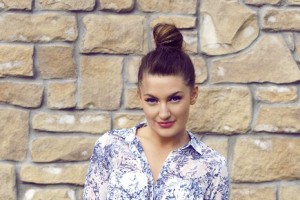 I’VE always been a little bit of a rebel, loved breaking all the rules… in fact it was only a short 6 years ago during my student days that I managed to convince some (overworked and underfed) PRs that I was indeed a ‘somebody’ and blagged my way into select shows… even ones as notable as Matthew Williamson!

Since then security has beefed up a bit and tickets are a little more scarce – so if I was to try that now, I doubt I would even get past the Somerset House gates!

So, even though I now actually ‘belong’ in those seats, the excitement, butterflies, anticipation and delight at seeing these designer collections come to life first hand hasn’t waned. Fashion Week for me is as exciting as it ever was… even when you’re ‘legitimate’!

My LFW 2013 kicked off with a stylish FROW (a major upgrade since my sneaking-in days) at the Bora Aksu show; the intricate heavy beading and embroidery gave his always quirky collection an element of regal quality and a cute hint of Little Bo Peep meets Fiddler on the Roof; his collections are always a little off the beaten track, in a good way!

One of my fashion week favs… the Felder Felder sisters produced a sea of sexy underwater nymphs, with shimmering aquatic-blues, coral reef organzas and sheer whites to rival white-horse waves. Even their dewy skin and wet look hair gave the illusion of the models just emerging from the water like Venus! A far removal from last season’s leathers and furs, but ultimately still a Felder Felder girl – fearless and fashionable.

Next up was DAKS; this was my first time attending this designer’s show… and for a quintessentially British designer, the collection was a sublime trip to the French Riviera, with chic headscarves, oversized sunglasses, dreamy chiffon capelets and a soft palette of camels and creams. The stand-out piece for me was the unexpectedly sexy backless shirt. Wherever this girl spends her holidays – I want to join her!

My day ended with Jean Pierre Braganza. Known for his cool aesthetic, he gave this season a softer twist with some injections of baby pinks and blurred prints. His usual androgynous direction was deconstructed even more with varied necklines and asymmetric shapes. Bold and directional, the JPB girl is certainly no shrinking violet.

The night ended on a high at the Untitled party in the trendy INK haunt in Leicester Square; the torrential rain didn’t stop party-goers as we were treated to peach-coloured champagne cocktails and Kate Nash spinning the decks.

Day 2 began with a sore head and a few Nurofen before seating at Zoe Jordan. She, in my eyes London’s equivalent to Alexander Wang… it’s strategically sporty but with a girly twist. Relaxed tailoring is her game and this season was no different, with another ultimately wearable collection of separates and dresses. This season’s twist was a grown-up skater girl with doodle graffiti artwork sketched across simplistic designs to give it a 90s touch.

Nothing could brighten up the rainy weather more than the bonbon-inspired collection at Antipodium. The delectable collection was a variety of sumptuous sorbet tones, with soft suedes, strategically sprinkled embellishments, and see-though sweet-wrapper like skirts. I even spotted Susie Bubble standing next to me trying to get some close-up pictures… no doubt we will see her in one of the bright pink peter pan collar box shirts next season.

Sitting next to the always-beautiful Laura Whitmore at John Rocha was next on my list, where she was flying the Irish flag by wearing a voluminous green coat from his current collection. This was a distinctly Rocha collection, there was no mistaking that – with his varied silhouette shapes, but with directional use of sheer fabrics and floral applique, it was Lady Havisham meets a modern Jane Eyre, dreamy and ethereal like only John Rocha can do.

The day ended with the Mark Fast collection; a plethora of sexy spiderweb-like, body-con knitwear with peek-a-boo skin and dramatic fringing. While still championing curvier models that gained him headlines in previous years, this time the FROW barely batted an eyelid as the fuller-framed models shook their tail feathers down the catwalk. The newest direction for his take on knitwear this season was the electric neon colours which offset the overall punk vibe and also the few sporty pieces like wide leg trousers and skater skirts teamed with crop tops.

My usual lazy Sunday brunch was interrupted with a quick trip to see the new Smythson collection of leather goods, where I believe I narrowly missed an up close and personal experience with Miss Wintour herself. I did, however, get to see the new collaboration with cult British artist Quentin Jones, named ‘The Panama Legacy,’ which features a series of ten unique artworks, inspired by the iconic Smythson Panama diary.

As a shoe lover, my next port of call to see Manolo Blahnik’s latest offering was a real treat. Manolo’s beautiful niece Kristina showed me through the borderline Alice in Wonderland maze of corridors in the stunning Covent Garden hotel venue to a small room that had been exquisitely merchandised into shoe heaven – think Carrie Bradshaw’s walk-in-wardrobe on acid!
I also had a private screening of Manolo’s film ‘Jealousy’ which was a short film noir featuring a comical tale of a husband who was insanely jealous of his wife’s affair… with her shoes – naturally!

Next was the Teatum Jones’ showcase in Somerset, a design duo I was introduced to last year. Possibly the most wearable of all the collections I saw at LFW, the killer white perforated leather jacket and soft structured dresses in a predominately monochrome colour palette was ‘to-die-for’. The relaxed setting had models on podiums, while a video played on the wall with musings of the designers also enscripted with beautiful dedications, allowing spectators to walk around the designs from a 360-degree approach and even touch the designs.

I had to hot-foot it to the Topshop Unique venue at Regent’s Park next to squeeze in Sophia Webster for more shoes! Her Bug’s Life set and live model show was a visual delight, and proof that fashion needs to be more interactive… an exciting way to see inside the mind of the designer. Models had bug-like hair while parading around their life-size garden in the outlandish and kitsch shoes and bags for which Webster is known.

My LFW came to stylish end with my last show at Topshop Unique, not a bad one to end on as it really as they put on a monstrous spread (yes fashion people do eat!) and it is of course the Who’s Who of celebrity FROWs with, for example, the gorgeous Ashley Madekwe and Sadie Frost sitting in front of me.
IT girl of the moment Cara Delevigne opening the show in cute peplum top and silk shorts, with the overall vibe screaming a stylish return to the Seventies, with backless wide-leg jumpsuits and silky maxi dresses with spaghetti straps… and with literally every item going on my future shopping list.

So my 3-day affair with LFW came to an end, with my feet soaking wet I was hobbling back to the car when I spotted in front of me a famous bob… a little blonder than I expected and sporting a fabulous leather coat wiuth fur trim cuffs. What better way to end a stylish week than following in the footsteps of the head priestess of Vogue US! If you believe in signs… then that’s a pretty good one.