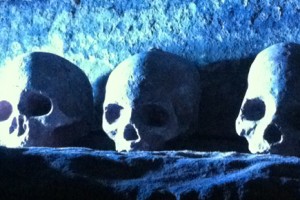 PILLOW Magazine’s Sebastian Skelton reports back from the spooky Halloween film screening at BFI’s Gothic Film Festival, held within the ruins of Kirkstall Abbey in Leeds.

The sun had already set by the time we arrived at the venue, the pitch-dark entrance to the grounds heightening our senses, unsure of what was awaiting us. Upon entering, we found ourselves in the main quad, illuminated by strange lights and with atmospheric sounds pumped through various speakers all around. Electric candles and skulls lay dotted around and shadowy figures slumped in corners ominously.

Making our way to the main area of the crumbling abbey where the screenings were to take place, we got out a blanket and took a seat in the makeshift cinema. With the stone walls surrounding us on all sides and the night sky above, we knew we were in for a unique experience.

After a few puffs from a smoke machine and an introduction by the head musician Neil Brand, the first film got under way – the 1922 F.W. Murnau classic: NOSFERATU. One of the first ever portrayals of Dracula in cinema, this silent horror masterpiece was further enhanced by two aspects:

Firstly, the print shown was a recently restored version that was astonishingly clean and crisp – more so than any other version available before. Sometimes it was hard to believe this film was over 90 years old! Secondly, as it was a silent film, the entire screening was accompanied by a trio of musicians (on piano, violin and percussion) that improvised(!) throughout the entire piece, matching the on-screen mood and events with eerie precision. It was a truly atmospheric and sublime one-of-a-kind experience.

After a short break, where we grabbed a bite to eat and a hot drink from the various stalls in the quad, we settled down for the second screening of the evening: the 1957 Jacques Tourneur directed NIGHT OF THE DEMON. Despite some slight technical difficulties and an onset of light rain early on, we very much enjoyed this slightly more B-movie offering – a story involving fire demons, curses and the occult. As hokey as it was, the special effects were still impressive (for its time) and its influence on modern horror films is undeniable Sam Raimi’s 2009 film Drag Me to Hell particularly comes to mind.

An all round spookily excellent evening – recommended for lovers of classic horror cinema. Though this was the first of its kind, the Gothic Film Festival is scheduling many more screenings at various locations throughout the UK in the near future, so keep your eyes open to catch one near you.

For more information on the event visit www.gothicfilmfestival.co.uk.