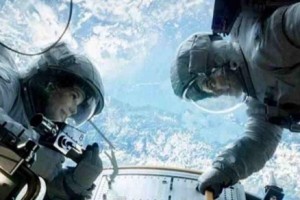 From the opening continuous shot circling around a space shuttle and astronauts that seemingly goes on forever, to the roving camera floating behind a character’s zero gravity trip through the cramped interiors of a space station littered with debris, Gravity is continually stunning to behold.

It’s a constant balancing act of opposites – the infinite expanse of space feeling serene and beautiful at the same time as being utterly merciless and terrifying. The ultra wide shots dwarfing a single person against the massive curvature of the earth, contrasting with the in-helmet POV shots filled only with panicked breathing and the crackle of the radio. Steven Price’s emotional score soaring beautifully at times, and at others we are met only with the cold muted thuds and the eerie stillness of space in Gravity’s Oscar-worthy sound design.

The story set-up is simple. A spacewalk goes wrong leaving two astronauts (played by George Clooney and Sandra Bullock) stranded away from their shuttle. Dealing with one situation after the next, they have to work together to have a chance of returning safely to earth.

Being the cool, chatty veteran is hardly a stretch for Clooney, but it’s Bullock as the inexperienced rookie that surprisingly puts in a career-best performance. She’s always been proficient at comedy but her roles in drama have been largely unremarkable. Here she proves her worth and under Cuarón’s direction we are with her every step of the way on a constant thrill-ride.

Sure, it’s not a perfect film – the dialogue can be downright expositionary at times, the themes of survival and rebirth are occasionally heavy handed and space buffs will undoubtedly be picking holes in the plausibility of everything that happens as soon as the credits roll.

But that’s missing the point. Gravity is that rare kind of film that comes along and combines just the right amount of Hollywood schmaltz and commercial sensibility to appeal to a broader audience whilst remaining ‘art-house’ and doggedly focussed enough in its presentation (not to mention featuring a myriad of jaw-dropping technical achievements) that will impress even the most jaded critics.

3D is usually an optional extra for most films that offer the format, but in the case of Gravity it is downright essential and elevates the film’s visuals to unprecedented levels of beauty and immersion. The sense of scale and depth to objects in space, the wrecked debris floating all around, the panicked realism of the first-person shots – this is what the technology was built for. It enhances the experience in a way that no other 3D film has previously managed. It’s not just a gimmick here.

In truth, you’ll be hard-pressed to find a more built-for-cinema experience this year. Go and experience it in 3D on the biggest screen you can find, as soon as you are able to.