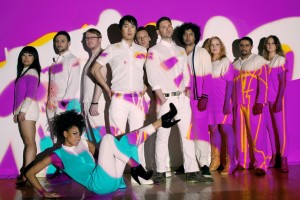 ESCORT, an orchestral disco band born and bred in Brooklyn, consists of 17 people: all from different corners of the New York downtown borough.

In January, Escort’s self titled album was voted #40 in the Rolling Stones Album of the Year list with comments such as “Disco never died. It was just hiding out in Brooklyn.”

Jake Shears describes them as “the best disco you’ve ever heard.”

Born in the college years – back in 2006 – two members met during an electronic music class. This is where it all started, and here at Pillow, we don’t doubt that they’re ever going to stop!

Escort has broken out of America after a successful tour. Earlier this year, the group arrived in Europe with their dancing shoes on and their boom boxes bouncing.

We caught up with them in London for a quick chat. Here they reveal why Lisbon was the best show, the typical disagreements between band members and what they would be doing if they weren’t a part of Escort.

How was the European tour? What’s been the best show?

It went amazingly. We discovered that Londoners are great dancers.

Our best ever show was probably in Lisbon: the stage was tiny – which is difficult because we have so many band members. They crammed about 300 more people than they possibly should have into the venue. It was electric. A guy emailed us afterwards to say that he was selling a 3D, Blu-ray bootleg of that show on the streets.

They sang ‘Happy Birthday’ to Eugene.

How did there come to be so many members in the band? How did you all come across each other?

To pull off live disco music, you need all those instruments involved to do it the right way. There are a lot of us, but that’s what it takes to do it properly.

Escort started with Eugene and Dan, who were in college together, DJing together and studying music.

The rest of the band was hand-picked from friends in Brooklyn. We’re lucky, as Brooklyn is a bit like one huge band, where everyone knows each other and everyone also happens to be an amazing musician.

Do you have any disagreements?

Well, Eugene likes to drink Stella, so there are some disagreements about the rider backstage (Adeline likes white wine!).

However, musically, there are no disagreements, as musically the parts are all set: it’s very much a controlled orchestra, not a band jamming out.

Some of the most powerful songs are the ones where everyone plays the exact same, simple thing… so if one person strayed from that, it’d ruin the illusion. Everyone in Escort enters into that spirit.

How does everybody contribute to the creation of the songs?

Dan and Eugene do the majority of song writing and production. However, now we know everybody better, more people are getting involved early on. The more we get to know each other, the better we write for the whole band: it’s about what makes everyone shine the brightest.

Tell us about the music you play…

What would you say are the inspirations, musically?

We all bring different influences to the table, which makes the sound what it is. We’re all fans of late-70s disco, but also want to sound like a band from 2013. There are the production giants – Nile Rogers, Giorgio Moroder – who are huge touchstones for us, but we don’t want to be too retro either.

What songs would you say make an amazing party?

From our album, literally every track. Play it from top to bottom, and that’s your DJ set. The writers of Escort are DJ’s too, so making something feel like a party throughout is always in our minds.

And if you weren’t in Escort, what would you be doing now?

Adeline would be a cashier. Eugene would have gone to cooking school, or been a farmer. Dave would be a bicycle racer who’s not winning anything. And there’s no free beer in that.

Back in Europe next week with pit-stops at Austria, Vienna and Portugal, it is safe to say that America has a fight on its hands for Escort’s attention.