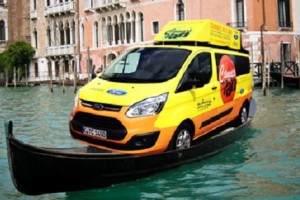 CANNES in a Van – The World’s Smallest Mobile Film Festival Cannes in a Van is back! This time to face their biggest challenge yet: to drive all the way to the Venice Film Festival.

Created by two UK film enthusiasts, Cannes in a Van (or CIAV) had a vision of taking independent films to Cannes and screening them from back of a Ford Transit van.

Their first trip was successful in 2007 and has now become an annual pilgrimage. However, this mobile cinema is trying something new this year: driving the official selection of Van d’Or Award-winning films all the way to Venice to screen at the Venice Film Festival.

Not only is this their longest drive yet, passing through Belgium, Germany, Austria and Italy, but once they get there they have the city itself to contend with – as Venice is renowned for its multitude of waterways, not roads.

“We’re excited to break new ground by taking Cannes in a Van to Venice and hope all goes well. Venice is not known for its love of cars!” says CIAV co-founder Andy Greenhouse.

In their second year of being sponsored by Ford, the Transit Custom van will come specially prepared with a sound system and 55-inch plasma screen.

Cannes in a Van departs for Venice on 28th August. For more info go to www.cannesinavan.com.

Fashion on Film for Free!