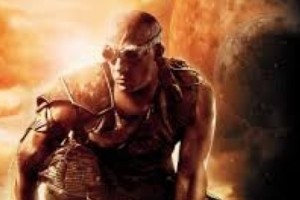 WHEN the third film in a franchise simply calls itself ‘Riddick’, it comes across as a statement of intent. With a title like that you would expect for the film to be the definitive portrayal of the character or at least offer a fresh perspective on him.

It’s neither of those things.

First introduced to us in the sleeper-hit creature-feature Pitch Black (2000), Vin Diesel’s night-vision equipped anti-hero Richard B. Riddick proved so popular that in 2004 he got his own (less well received) spin-off film: The Chronicles of Riddick – this time opting for an ambitious space opera.

Re-united once again with director David Twohy, the pair are back for a third go – this time with a scaled back budget that confines much of the film to a single location, just like the first film.

It’s odd then that they essentially try and give us three films in one. The first third focuses on Riddick: the survivor. Left for dead on an unknown planet, he has to fend for himself, find food, water and shelter, perform DIY medical procedures and fight off all manner of CGI beasties. It’s largely wordless and has decent acting from Diesel but comes across as slightly self-indulgent. By the time you see him standing butt-naked on a plateau in the sunset for absolutely no reason or power-sliding through the mud clutching a puppy, you too may well be shaking your head.

The second third of the movie radically switches things up with the arrival of two separate teams of mercenaries, both intent on capturing Riddick for the sizeable bounty on his head. Reminiscent of the likes of Predator (the difference being we are siding with the hunter here), it’s surprisingly Riddick free – the titular character instead opting to slink around in the shadows – harking back to a similar sequence in Pitch Black.

It’s a shame then that we have to spend the majority of this time in the company of the squabbling, unlikeable, cringe-worthy dialogue spewing mercs, who’s persistent attempts at hard-assery, incessant and gratuitous swearing and a propensity to spout reams of exposition get tiresome very quickly.

The film then changes once again – the final third essentially being a re-hash of Pitch Black, albeit devoid of tension or care for any of the remaining characters.

You would think having Riddick interact up-close with these characters would make things more interesting, but sadly even Riddick’s trademark sass and constant wisecracking start to grate after a while (he even inexplicably starts throwing in ‘street’ slang such as talk of people being “ghosted” or the phrase “I’ll drive it like I stole it” – oh dear).

There are many wasted opportunities that only serve to frustrate. It’s good to see Karl Urban return in the role of Vaako (from The Chronicles of Riddick) although unfortunately it’s limited to a single scene. A conceit with a bomb-padlocked locker is interesting – but unfortunately has no pay off. For all of Katie Sackoff’s efforts during the film not to be treated by the other mercs as the token female, she ends up being just that – complete with derogatory slurs constantly being directed at her and a scene of gratuitous nudity. Former wrestler David Bautista is surprisingly one of the better performances here, although his inevitable scrap with Diesel (one that is expected as soon as you see his name in the opening credits) is short lived and a missed opportunity. If you were expecting a fight similar to Vin Diesel versus Dwayne ‘The Rock’ Johnson’s epic showdown from Fast Five, you will be severely disappointed.

It’s not all terrible though. It’s nice that they attempt to tie the film in with the existing mythos, such as the events following on directly from the second film or even introducing related characters from the first film. There is also one great comeuppance death scene that will have audiences cheering.

However it’s not really enough to recommend this mess of a film. The CG is occasionally cheap looking and unconvincing, character motivations and allegiances switch unexpectedly and the film relies too much on recreating Pitch Black without really getting why that film worked. The character of Riddick was effective back then as he was an unknown quantity, introduced as a villain but then gradually emerging as the hero at the end, in tandem with the audience’s sympathies and approval. Here he is almost an overblown caricature, one that despite taking his knocks, you know is never in any real danger.

Looking back at the choice of title, just calling the film ‘Riddick’ now seems instead to be a lazy and/or uninspired choice – or worse yet, a desperate attempt at cashing in on the character’s legacy. Thoroughly disappointing.