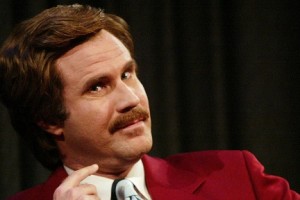 Entitled Let Me Off At The Top!: My Classy Life and Other Musings, this memoir offers a rare glimpse behind the camera into the life of the legendary broadcaster, including anecdotes about the women in his life, his dog Baxter and his fellow news team members.

The man himself has been quoted as saying: “I don’t know if it’s the greatest autobiography ever written. I’m too close to the work… I will tell you this much: the first time I sat down and read this thing . . . I cried like a goddamn baby, and you can take that to the bank!”

Let Me Off At The Top! will be published simultaneously in the U.S., U.K., Canada, and Australia in print and digital formats on November 19.

Anchorman 2: The Legend Continues will be released in cinemas on December 20th