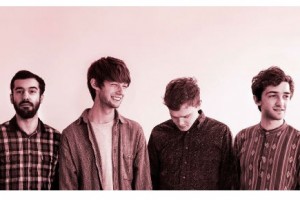 HERE at Pillow Mag, we love our crazy, young and alternative boy bands.

We also love hearing about brand new talent, and following their journeys.

Four-piece Lion Bark from Brighton, aged 20-23, are no different.

Their name for a start! That won me over straightaway – I have a huge soft spot for lions; being kings of the jungle and all, and a reminder of my beloved university college.

An introduction if you please. We certainly would like one: Guy Bangham is lead vocalist and plays guitar; Ozzy Ellis, guitar and vocals; Josh Eruskin, bass and vocals; and Zal Jones on drums.

Having originally met in music college, the lads immediately found the outcome that they were searching for: a band that they had dreamt of creating.

They dropped out before the end of their first year.

And who says music school dropouts don’t succeed in life? Not these fellas.

Having moved into a flat overlooking the sea and taking on various jobs (postman, waiters and call operators), Lion Bark started producing their music.

Two Prongs is a summer jam: one of those songs to listen to during a lazy summer’s afternoon in the park. Their harmonies are sweet, and they have unique acoustic skills which keeps the song fresh and romantically escapist.

The following single Longhorns is much more upbeat. The guitar strings are plucked faster (perhaps the heart strings too, ladies?) and there is a set of drums in this song. Yet, the feel of escapism remains, and the heart and sould of the music does too.

About long distant friendship, produced shortly after the move of Guy’s two best friends to Texas, the song complements the hardships of moving away and getting left behind; with a lovely song.

Of course, they will most likely be leaving the Brighton nest too as they fly off into their musical world of indie rock/pop dreams.