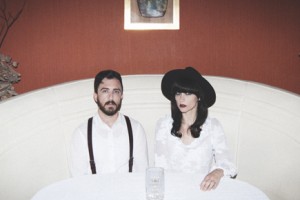 IN The Valley Below have a pretty impressive Christmas card list, having toured with Kodaline and about to hit the road  in the US with White Lies and Cold War Kids.

The band, aka Angela Gail and Jeffrey Jacob from Echo Park in LA, have already made quite an impression with their performances at SXSW and the Reading and Leeds festivals.

Their new single Stand Up is an infectious piece of pop-tinged edgy rock that will be released on November 11. We scouted around their SoundCloud and loved a second more melancholic song, Hymnal. Listen to both, below.

Debut album The Belt will be release in early 2014.

Catch them on tour with White Lies in December at the dates below.

Listen to Stand Up, below.

Listen to another track, Hymnal, below.