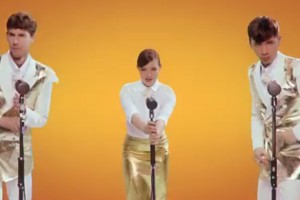 FASHION brand ASOS have launched their very own ‘house band’… and after watching them in action at their launch last night, we can confirm they are brilliant!

The 80s-inspired gang will be releasing a new track on the ASOS website each week – and the first one is out… TODAY!

It’s called LOLROFLOMFGLMFAO and if you need a translator to understand that, then you’re not the only one.

Seven more songs and videos will be released over the coming two months, each premiered on the ASOS website weekly on Friday mornings.

One of the music videos, Supersonic, features former Made In Chelsea star Millie Mackintosh and her transition from West London It Girl to East London lover thanks to getting hitched to Hackney-born rapper Professor Green.

The song, which celebrates her sense of style and London’s love of partying, will be released on the ASOS website on 22nd November.

Check out their first release, below.

Millie Mackintosh at the launch of The ASOS House Band in London. Pictures by Daniel Lewis