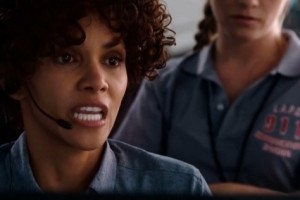 HALLE Berry has had a career of many ups and downs. Having won an Oscar (for Monster’s Ball) but also a Razzie (for Catwoman), it appears she can be a very good actor when given the right material – it’s just a shame that in that regard The Call falls severely short. Halle plays Jordan Turner, a 911 operator who goes into semi-retirement after she blames herself for the kidnapping and death of a young girl on one of her emergency calls that went horribly wrong. When a similar case rears its head several months later, she can’t help but be drawn back in. Suffice to say, the rest of the plot is clichéd, heavy-handed and will have you constantly wringing your hands in frustration at the various characters’ ill-advised actions (or indeed inaction) – and never in a good way. With a sloppy kidnapper that’s way too lucky at not getting caught, plot contrivances and coincidences that would make even seasoned moviegoers who are accustomed to regular ‘movie logic’ balk, and a supposed ‘hell yeah’ ending which, if you stop to think about the ramifications of it, is completely wrong for the characters and the movie – it all seems a bit lazy. Halle Berry does a good enough job – commendable even – considering that most of her scenes are just reaction shots of her listening to people on the phone. Abigail Breslin (once Oscar Nominated as the charming youngster in Little Miss Sunshine) is wasted even more here, the majority of her scenes consisting of nothing but sobbing and screaming. Director Brad Anderson, who once made the haunting Machinist, has been directing a lot of TV lately, and those sensibilities seem to have rubbed off here. The Call plays like a by-the-numbers crime series on TV – a generic thriller that holds no surprises. You’re better off just staying in and watching an episode of Law and Order – it’ll certainly be a cheaper night out. (Score: 2.0 out of 5)