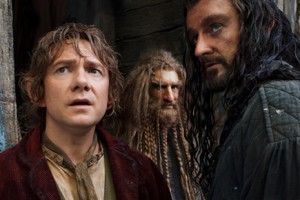 FREE from the burden of having to dealing with a lengthy story set-up (a common complaint of the first film), The Desolation of Smaug hurtles headlong back into the adventure, with barely a pause for breath.

With many great new locations, set pieces and characters, it’s surprising just how much more of the story they have managed to cram in. From meeting the hirsute Beorn, the trippy mind messing of Mirkwood, a spider attack, an encounter with some less than friendly Wood Elves – all leading up to the spectacular barrel river ride sequence (one of the sure highlights of the film). All that and you’ve only just reached the halfway point of the film.

The latter half does slow a little as the damp and gloomy Laketown is introduced and Gandalf gets to go on his own solo mission to uncover what’s going on at Dol Guldur. And although the ending may feel a little abrupt, the scenes leading up to the end featuring the titular dragon (menacingly voiced by Benedict Cumberbatch) certainly do not disappoint.

Lee Pace impresses as the icy Elf King Thranduil, but of the new characters it is Tauriel (Evangeline Lilly) that gets the most focus, adding a much-needed female element to the story. Although her proposed love triangle between a young and hot-headed Legolas (Orlando Bloom returning in the role) and Kili (so that explains why he’s the most non-dwarf looking of the dwarves) doesn’t really seem all that conflicting, it is more than made up for by her awesome fight sequences and a welcome proactiveness that is separate from the main group and their quest.

Similarly with Bard of Laketown (Luke Evans), whose plight offers a reasonable counterpoint to the Dwarves’ actions – he has a family to protect and he is sure that their quest will anger the slumbering beast within the Lonely Mountain. It’s always interesting to see different motivations and new points of view coming in to play, as well as the cracks beginning to appear in existing characters – Richard Armitage’s Thorin shows hints of starting to succumb to the curse of his ancestor’s greed – and this layered storytelling and characterisation helps bring this film more in line with the politics and power-play of the ‘Rings’ trilogy.

Even the kiddy, cartoon-like action of The Unexpected Journey has given way to more darker and visceral action beats. Everything seems a tad more urgent and serious and there is plenty of ‘Elf-Fu’ fight choreography to elicit ‘ooh’s and ‘ah’s from fans who want a bit more bite to their battles.

It seems that with The Desolation of Smaug, The Hobbit has finally found its feet, although it remains to be seen after the final part is released next year (when the trilogy can be viewed as a complete story) whether of not it all works together as a cohesive whole and whether all the newly introduced threads and set-ups from this entry will be satisfactorily resolved come the conclusion.

In the meantime, however, you can enjoy this for what it is – a solid slice of entertainment with unparalleled production values and fantastic set pieces. A marked improvement over the first film and as such comes thoroughly recommended.