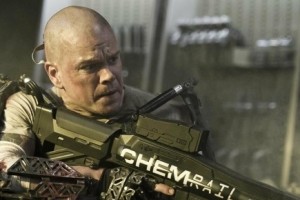 SOUTH African director Neil Blomkamp made waves with his hit debut film District 9 and in his follow up Elysium, we are treated to more of the same – his panache for world building, a keen eye for detail and fantastic production values – albeit this time with a bigger scope and budget.

Although there is less biting social satire as there was in District 9 (essentially the apartheid with aliens), this one also deals with social issues such as the wide gulf between the haves and the have-nots, coupled with strict immigration policies and the distribution of healthcare (centred around a machine that can just about cure anything). It’s a bit broader and hardly anything new to sci-fi, but it serves the film well and provides the backdrop for the main thrust of the story.

Matt Damon’s reformed ex-con Max is involved in an industrial accident leaving him irradiated and dying. He’s always dreamed of escaping the squalor of life on polluted Earth to reach the idyllic and verdant paradise of the space station Elysium, but now he is forced to find a way up there by any means necessary – as the only thing that can save him is one of those miracle machines (mentioned above) that are only available to the rich folk who are lucky enough to live up there.

And that’s pretty much it. Despite one or two unexpected moments the story is pretty straightforward and predictable – a trajectory that is clearly defined early on. There is little character development either – most are simply presented as is, but the performances are (on the whole) good.

The trio of villains are excellent: stiff suit William Fichtner, ruthless Elysium overseer Jodie Foster (not quite sure what that ‘European’ accent is about though) and, perhaps most surprising of all, Sharlto Copley as the scarily effective mercenary Kruger. In fact, Kruger musters such a menacing presence in this that he is likely to be remembered as one of the most memorable adversaries to feature on the big screen this year.

It’s also nice to see Matt Damon in a slightly more ‘thuggish’ role (complete with shaved head and prison tats) – but the real star of the show is undoubtedly the visuals.

From the skyscraper-tall stacked shantytowns and gargantuan factory floors (never has industrial squalor looked so awe inspiring), to the sweeping vistas of the ‘Beverley Hills in space’ of Elysium and its sleek and shiny interiors – everything looks amazing in this film. All the tech too – be it robots, guns, exo-suits, spaceships and command centres – are all lovingly crafted and expertly designed.

Blomkamp certainly doesn’t disappoint in this regard and tech lovers will have a field day. The CGI is top notch, action scenes visceral and occasionally gory in parts without being gratuitously so. Visually, this film cannot be faulted; it’s just a shame that there wasn’t a bit more meat to the story. Truth be told, it’s all a relatively straightforward affair, but when the presentation is this lovingly put together it’s hard not to be enthralled.

Not as fresh as District 9, but it’s undeniably Blomkamp and lovers of sci-fi will find much to enjoy here.