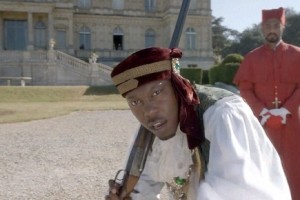 EARLIER this year in Bassline Junkie we learnt Dizzee Rascal didn’t need no speed, heroin, coke or ketamine. Now the rapper has decided to add to this growing list and reveal he doesn’t need a reason either. A reason, it seems, to party, show off, and to treat everyday like it’s summer in the way we hoped Dizzee would.

Perhaps it’s a response to the critics who say the Boy In Da Corner abandoned his Mercury Prize-winning, socially-conscious early days to become a mainstream sell-out with 2008′s Dance Wiv Me.

And now he’s delivered a grimy retaliation. But who cares, because this tune is a BANGER.

The follow-up single to the bloody awful Robbie Williams collab Goin’ Crazy, Dizzee is back at his rapid-fire-flow best, spitting rhymes like “God bless me, nobody can’t test me/Everyday life can’t stress me, stay on the ball like Messi” over a dirty bass.

Produced by Jean Baptiste (Madonna, Chris Brown), Dizzee describes this new sound as “worldly but fun”, and has gone on to say that this new album is his best yet.

Released on October 1st, The Fifth will feature Jessie J, will.i.am and the man whose career Dizzee made possible–Tinie Tempah.