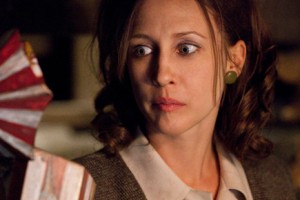 A CREEPY doll, an old house with a scary cellar, creaky doors that open and close by themselves, a music box, animals that act oddly, things that go bump in the night, various apparitions, possession and exorcisms – the list goes on. These classic horror movie tropes (and a lot more besides) make up much of The Conjuring’s running time.

Yet instead of feeling tired and cliché, Insidious director James Wan manages to bring them together into a cohesive and creepily effective whole. The key? It’s a period piece – paced and filmed in a style reminiscent of the granddaddy of all horror films: The Exorcist, but with a more modern eye for what works and what doesn’t. It’s set in the early 70s, so you have the flares, sideburns and frilly collars; and much of the frankly ridiculous dialogue doesn’t often come off sounding as such due to the combination of this setting and all the actors gamely playing it completely straight. Bottom line: it just wouldn’t have worked as well in a modern setting.

The story follows two parties: the ghost hunting duo of demonologist Ed Warren (Patrick Wilson) and his clairvoyant wife Lorraine (Vera Farmiga), as well as the requisite family being tormented by evil forces. Slow burning to start with on both fronts, it’s when the two come together that the film really starts to get going. There are prolonged eerie moments, jump scares and false moments of tension, all well handled – even the usually overly familiar exorcism scene has an interesting twist to it. There’s nothing really new here – just old stuff done particularly well. Wilson and Farmiga are strong in the leads and its nice to see Lili Taylor in a major role again (as the mother who takes the brunt of the ghostly torment), getting to show off her range – both physically and emotionally.

With lingering shots, the camera creeping around corners and down stairs to occasionally spiralling upside-down – the film is well shot, looking to subtly unsettle rather than to call attention to itself. Similarly so with the music and sound design. Its refreshing to see a decent horror movie that doesn’t have to rely on either a high body count, nasty gore, ‘found footage’ realism, an over reliance on CG or be some kind of subversive self-parody in order to be an effective chiller that stands out from the crowd.

Wan has obviously taken on board the criticisms made toward the sudden tonal shift at the end of Insidious, and in The Conjuring, the climax builds to a suitable conclusion that is in line with the rest of the film. It all finishes a bit too and quickly and conveniently however, making the film fall just shy of greatness. It’s not overly terrifying, but you may just develop a fear of old wardrobes after watching this one.