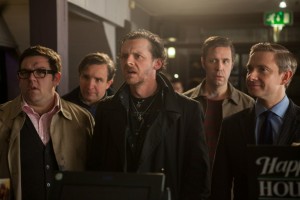 SIMON Pegg, Nick Frost and director Edgar Wright combine forces once again in this, the final part of the ‘Three Flavours Cornetto Trilogy’, following on from the excellent Shaun of the Dead and Hot Fuzz.

The World’s End is the story of Gary King (Pegg), a man perpetually stuck in his adolescence, who decides to reunite the old gang from school back together in their hometown in order to complete the legendary ‘Golden Mile’ of 12 pubs. But upon returning to the streets of Newton Haven, they can’t help feeling that something seems amiss, as they soon discover that the inhabitants aren’t who they seem.

Despite its gradual decent into sci-fi hokiness as the film progresses, at its core the story is about the friendship between the characters and the very prevalent theme of change. Yes, the town has been taken over by sinister forces, but this is merely the theme made literal and amped up to a ridiculous degree.

It’s really about how people change over time, the homogenisation of small towns (Starbucks is explicitly referenced) and how the refusal to change (as in Gary’s case) can seem like a liberating thing, but in fact be damning – something that is once again turned on its head as the film continues.

Wright is a master of interweaving his themes and emotional beats deep within the narrative and as such, whether or not the film succeeds as a decent sci-fi film isn’t all that important. Viewed on those terms only, it’s competent but nothing groundbreaking. In fact, it’s just an interesting choice of vessel to carry these themes across the movie and as such the film is superbly written, possibly even the best out of the trilogy. It’s a fine line to balance comedy with pathos, but the film consistently manages it. On all accounts Gary is an insufferable and immature idiot and yet we continually root for him throughout.

The rest of the cast is also a delight: Frost as his best friend Andrew (in a reversal of roles, this time playing the straight man to Pegg’s maniacal irreverence), Paddy Considine as the good egg Steven, Eddie Marsan as the quietly compliant Peter and Martin Freeman as the prim Oliver. This group of friends is clearly defined, well realised and much of the comedy of the film is derived purely from the sparkling dialogue of their banter.

The action scenes are also worth mentioning – particularly the fight scenes (or a better description would be ‘brawls’). Wright has clearly learned a lot from his time on Scott Pilgrim vs. The World; and here they are inventively choreographed and well shot.

Fans of the ‘Cornetto Trilogy’ will love the multitude of familiar faces and cameos (see if you can spot them all), recurring jokes within the film (and even within the trilogy), and the frequent foreshadowing – it’s so rich with detail that watching it again will undoubtedly reveal more hidden gems.

The World’s End is not perfect, however – the climax to all the action is a bit of a let down, although the denouement itself is suitably bonkers and genuinely unexpected. It’s a brave ending yet one that is very fitting.

To sum up: it’s better than ‘Fuzz’ but not quite as good as ‘Shaun’. It is, however, the must-see British comedy of the summer and comes thoroughly recommended.