DANISH pop sensation Fallulah is still unsigned here in the UK, despite being a superstar in her home country. She’s performed to an audience of 2.5million on their version of the X Factor and her songs are on the soundtrack to many television shows over there.

Starting writing at the age of nine, when she suffered a family trauma and was uprooted from her familiar surroundings, Fallulah – real name Maria Apetri – was inspired to write as an outlet for her overwhelming emotions.

“I lost my father when I was nine years old. That’s the reason that I make music. It was my output, and way of getting my feelings out because I wasn’t very verbal about it. That was the whole foundation for me to write. It’s a sad foundation but it really helps me. I lived in Copenhagen as a child, and after he died my mum moved us out to the countryside where I didn’t know anybody. So I felt kind of lonely. I was really different from anyone, being a city kid and everything and they didn’t really get me and I felt like an outcast. And that isolation… I find a lot of inspiration from that as well.”

“I started writing in English when I was 11. It was easier for some reason to write in English. I wrote some really serious stuff back then. The older I get, the more silly and loose I get! It’s sort of the other way round! I think I’m sort of trying to catch up with some lost childhood or something.” 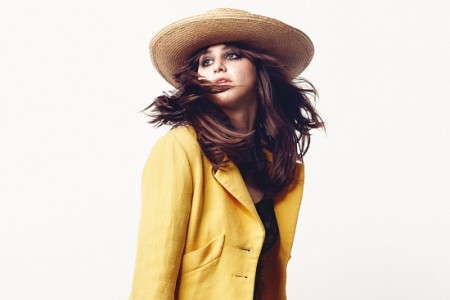 And now she’s here in England, in talks for a record deal and playing gigs across the capital. “I’m very excited, but I don’t know what to expect,” she says. “I don’t know whether it’ll be two people at the bar… I’m new here and it’s like starting all over again.

I’m prepared for it, as I know that’s what it takes and it took the same for me in Denmark, I worked really hard for a long time, before I had a big audience so I know it’s not just automatic, you have to work for it, so that’s what I’m prepared to do.”

Playing to millions on the country’s version of X Factor was massive exposure for the singer, but she admits, “It wasn’t really for me to be totally honest. It’s a thing where you have to perform with one of the contestants, and I’m very much a purist when it comes to music, I don’t use any backing tracks or anything like that and I want everything to be live. I couldn’t bring my band, so I it had to be a back track, it felt really mechanical and weird.”

“It was a huge thing, it was 42,000 people in there, broadcast to 2.5million people. I didn’t really enjoy it, it felt like it was out of my element. It’s sort of a freak show, it’s good entertainment, but for me, I don’t think it has a lot to do with music. It’s not for the sake of music, it’s for the sake of entertainment and that’s OK as long as you just view it as that, you shouldn’t see it as a big music programme as it’s not that.”

Does she feel that the reality show juggernaught is taking something away from the Danish music scene? “There’s still room for everybody who is writing their own music. I don’t know how it is here, but in Denmark it’s a really big deal. It takes up a lot of space, people really get into it instead of trying to support some of the music that comes from Denmark that is written by Danish artists. We don’t have a lot of international artists that are from Denmark, and I think that’s more important. Try and support that, instead of supporting people doing covers.

“It’s really interesting at the moment, there is so much good music coming from Denmark at the moment. Really original, exciting music and it hasn’t been like that always. Just the last three or four years. It’s blooming.”

With the success of television show The Killing, is Denmark the new hotspot for international culture? “I’ve heard people say that Denmark is the new Sweden! It would be cool if Denmark was the new Denmark. It’s a very small country, but people are very creative. I live in Copenhagen and that’s where a lot of creative people are situated. You can walk everywhere as it’s so small. It’s very old school and it’s kinda romantic in a way as the building are really old. It hasn’t changed much since 300 years ago, it’s still the same!

“I’m pretty homey, I don’t go out much but I love going out to eat. And we have so many really nice restaurants. The level is really high. We have the world’s best restaurant in Denmark. You have to book three months in advance – it’s doesn’t matter who you are!”

Fallulah released her album in Denmark in February 2010, but is it is only coming out in France now, and will be the album that she will release here in the UK. “Luckily, I still love playing these songs,” she laughs but adds, “I’m starting to write a little bit.”

Now, playing dates across the capital, what can be expected from her on stage performance? “The live shows are really energetic. It’s really funny because I’m playing with a UK band over here. And I was like ‘you have to sing, all of you have to sing’ and they were like ‘what?’ they weren’t used that.”

“I like that community feeling about the live shows, even though I’m a solo artist. clap a lot, I stomp a lot, dance around, that kind of thing.”

Drawing inspiration from her own experiences, Fallulah describes her album as, “Very honest. I didn’t censor myself. I wanted it to completely be the distillation for me. I think that really comes through in the music, I hope so. It’s really organic, I love wooden instruments. I love banjos, and weird little things. It’s not very electronic actually, most of it on the album is hand played.”

Fallulah’s turning point to pursue music came during a time when she lived in New York. “I love that city. It was scary sometimes, but I just got challenged every day and I was dancing at the time. I went to Broadway Dance Centre and I danced five hours a day which is pretty intense. The level there was really high. I wasn’t used to that, I was used to being good in Denmark, and I came there and I was shit! I was like ‘Im actually pretty good!’ I really wanted to do well and I’m really hard on myself if I don’t do well. It was good for me to experience, really having to fight for something and push yourself. I learned that there.”

The turning point came at the dance school. Fallulah joined a singing class, but when she got there she had to perform in front of her class. Unprepared, Fallulah had to sing one of her own songs, and her tutor and classmates were adamant she must pursue a career as a singer.

Leaving New York when she ran out of money, she went back to Denmark and worked full-time as a waitress, hating every minute.

But, the optimistic 26-year-old says, “That was so cool as it made me really motivated to write music and I did that in all my spare time. I rented a studio and I got someone to help me as I couldn’t play anything at the time. It really started there for me. It came together.”

And finally, one last question… the other night Fallulah turned to Twitter to complain about a girl going “at it” behind “paper-thin walls”… did she ever get her sleep?

“It was five in the morning! You’re not supposed to get up at that time. The boundaries of your privacy… I need my sleep! I don’t want to listen to anyone have sex!”