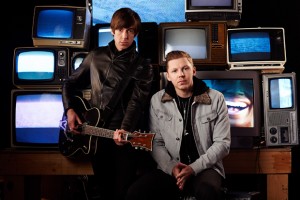 HACKNEY-born and raised rap/pop crossover phenomenon, Professor Green, has marked July 22nd in all of our calendars as a day were we can do nothing but sit back, and enjoy the greatness of having his brand new single Are You Getting Enough?

Now, I bet you thought we had told you everything about this fab new single from Pro Green? Well you’d be stupidly wrong.  Indie solo artist/ lyrical genius, Miles Kane, is both shredding his signature rock riffs and bellowing his tantalising vocal deliveries on what we believe to be the very best feature Green has had to date.

Professor Green commented on the track and his collaboration with Mr. Miles Kane, stating that: “Miles, Kid Harpoon (Tom – who produced the record) and me are all good mates, the song was just a by-product of our camaraderie. Looking forward to performing this one with Miles, it’s really heavy so it’ll be carnage. I might even wear a paisley shirt!”

Check out the new official music video for Professor Green’s Are You Getting Enough? ft. Miles Kane now, below.

Stay tuned with Pillow for all updates on Green’s tour dates for the year.