NATALIA Kills looks fierce. There’s no other word for it. Her cheeks are loaded with blusher, her hair’s pulled back into a top knot and her lips are slicked with bright orange. She has just flown in from Mexico where she’s been opening for Katy Perry.

She is is describing the sound of her debut album Perfectionist to me. “It’s like revenge pop, or kill your ex-boyfriend pop,” she tells me, dark eyes flashing under a wide dark slick of eyeliner.

“Her audience are really nice,” she says of the tour. “They’re all like really young girls who are either about to, or just had their heart broken for the first time, and they’re like ‘OK, fuck love. Let’s go the Katy Perry show’ so it’s perfect for me to open for her.

She’s like sugar with a bit of spice and I’m like spice with the occasional sprinkle of sugar,” she quips.

Natalia is chatty, effervescent and gabbles away telling me everything and nothing at the same time. You tend to get the feeling that she is very much aware of what she is saying, and has a shrewd alertness underneath her overwhelmingly positive patter.

She tells me Perry is “crazy nice”, describing how she closed down a theme park so that they could ride roller coasters together all day and that she loved working with LMFAO as they are all about the decadent side of being a pop star. “That is their dimension, ‘girls, booze, club’,” she laughs.

Will.i.am, who signed her, is a “genius”. She says that the Black Eyed Peas star is: “A little bit like an alien. There’s no human explanation to how clever he is and how creative he is.

“He was the first person to talk about creativity and having fun and being in the studio rather than say the words, ‘Number One! Money, money, money! Charts, charts, radio, radio!’”

I can’t let her get away without asking her about the unwavering commercial drive of the star though.

“He’s a very smart person. [He knows] when to do what and how to do it. He has so many things going on, from album-making to DJing. He operates on very hipster levels, on very underground and indie levels as well, but different areas; whether it’s with his production, his DJing, or very commercially with the Black Eyed Peas with his music. I think just the fact that he can create balance like that… and he can sign people! He signed me. It’s what makes him unique.

Natalia started off as a child actor, winning bit parts in various shows on TV before moving into music at an early age.

“When I decided acting was so not for me and I just couldn’t bare to play a character any more, I just wanted to be myself, it was very hard because I’d been through these horrible experiences and I found it almost traumatising writing about my own personal experiences. But then if I wasn’t writing about that the songs would come out really fake or really garbage-y so it took me quite a while to be able to properly articulate the songs for myself

“That is why I’m proud of my album Perfectionist because instead of it being an album, it’s more, it’s almost like… it sounds crazy… lyrically – it’s almost a collection of therapy sessions that I’ve been to, talking about my ex-boyfriend.”

“Most of the album is about my ex-boyfriend, it was a pretty shit relationship and my horrible weird childhood, and other things.”

Natalia takes a long time to answer why her youth was strange. She is very aware of her words, and chooses them carefully. Eventually she says that her parents had a very “wild romance” and says that their unpredictable relationship “greatly spilled” into her own life.

“I just decided to leave home and leave school when I was 14 and I took my older brother with me and we started a new life together in London. But I got a job and it was great.”

The message on her Twitter page reads ‘welcome to debauchery’, so I ask her what the most debauched thing she has ever done is.

“Oh fuck me! Shit. I don’t know if I can say. I would say my mother might be reading but she wouldn’t give a shit. Someone important with morals might be read this! I like to get up to all sorts of antics. What’s crazy is when I was growing up, I was on an extreme search for normality and stability and safety and love, and a future and relationship and stuff so I actually wasn’t wild in my teens like most people were. I was like ‘no, I’m 14, I’m going to get an apartment’. Now, I’ve had so many incredible experiences, I’m in this situation which is like a dream come true, so finally I can be as wild and debauched as I want, especially on tour, especially on the road. There’s no one to answer to, it’s really good.”

I ask a question inspired by a track on her new album called Zombie. If she were to come back from the dead, what havoc would she wreak?

Speaking of fashion – Natalia must be a fan of clothes with her edgy and distinctive style? “I’m opposed to it actually,” she delcares. “I just don’t believe in it, the notion of it.”

“Fashion is extremely silly and I resist it and I refuse it at all possible times but I do enjoy style. I really enjoy experimenting with my own clothes. Instead of looking in a magazine, and saying ‘oh! everyone is wearing beige, I’m going to wear beige, oh! this mannequin is wearing a hat, I’m going to wear a hat,’ which is how fashion moves, I prefer style.

“I don’t intentionally make decisions but I notice that I’m more drawn to black, I usually always wear black. Today I’m trying very hard to throw in another colour so I’m throwing in some splash of white, some orange, I think that style is the epitome of beauty because whether it’s your hair or your make-up, whether you’re old or whether you’re young, no matter what body type you are or what your budget is, style makes you distinctive and defined. It’s nothing to do with how much money you have, most of the time when people ask me, ‘Oh my God, where is your outfit from? Is it vintage Chanel, is it vintage Versace? Is it one of a kind, did they make it for you? It was from a thrift store and it was five dollars, it was from Portabello market and it was ten quid, or it’s from H&M, Zara or Topshop. People ask me all the time about fashion, but I prefer to oppose fashion and have fun with it.”

She feels so passionately about the subject, that it inspired the view for her new single. “The concept for my music for my song, Free, was like a Vogue photoshoot but on acid. Total debauchery, everything going wild, everything going wrong, everything ludicrous, ridiculous, outrageous, impossible, within that kind of realm of catwalks and posing, photoshoots and glorious silliness.” 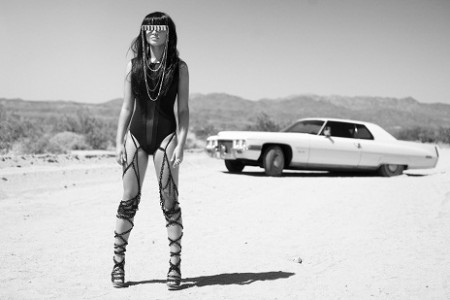 Other artists she admires include Hurts and the crazy-popular Adele, who she first heard back in 2007 when the chart-topper was still in Brit School. “She posted a demo on mySpace and it was a song called Daydreamer and Hometown Glory and a few years later it ended up being on her album 19 which I was a big fan of. Now she has the most epic album of all time which is out at the moment so that’s really great.”

“I really like that band Hurts, they are so cool they could take as much time as they want, I can’t understand why America has not gone wild, I mean I know it’s going to happen, but yet, because wow they are brilliant, I’ve seen them live, I watch their music videos, I’ve listened to their music on it’s own, they are just really good. And I feel like it’s what is missing to bring the strength back to the males in the music industry as it’s very female dominated at the moment.

“Me, I’m one of those girls that I wanna to listen to girl music, I wanna talk trash about boyfriends and I wanna listen to songs about… You know I’m a girl who likes girls, and even though a lot of people are obviously in the mind space at the moment, there will be a time where people are like ‘wait, where are the boys?’ and I think that Hurts are so good. I’m kinda in love!”

Perfectionist is out on 19th September.