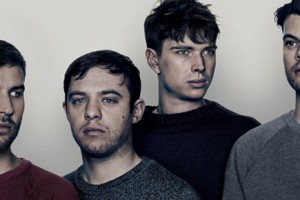 JUST hours before Everything Everything took to the stage for their brilliant set at Spanish festival Benicassim, Pillow Mag’s Mamie Hamshere caught up with Alex Robertshaw and Michael Spearman.

In our exclusive chat with the band, they reveal their worst disaster live on stage, talk about boozing at gigs and tell us  why they wanted us to watch Queens of the Stone Age rather than their set…

So, how are you guys feeling today?

Alex:  We went out late and watched some terrible music,

Michael: Don’t know why we did that but oh well.

Are you excited to be playing a festival abroad?

Michael: We’ve done loads of them but we’ve never done Benicassim before. It’s nice to be somewhere warm and by the seaside. We’ve done Poland, Netherlands – just in the last couple of weeks. It’s been busy, but it’s good to be busy.

Where are you going after this?

Alex: We’re going to Latitude on Saturday and Germany on Sunday.

What would be your ideal festival to play at?

Michael: The one in Germany is good. It’s called Melt.

Alex: It’s really good – the scenery there is incredible.  We enjoyed playing Latitude; we had a really good show there.

Alex: Yeah that’s always good to play but I prefer the smaller ones

Michael: Glastonbury is kind of overwhelming.

So, at this festival for example do you like going to the other music?

Michael: Yeah we tried to. We wanted to see Queens of the Stone Age but we clashed with them.

Ugh yeah we saw that… clashes are the worst.

Michael: Mmm; we wanted to see the Yeah Yeah Yeahs at latitude but clashed with them. And loads of stuff at Glastonbury that clashed.

Alex: We managed to see Phoenix and Nick Cave – that was good

Okay so I’m going to attempt to get more technical – one of the big things about you guys is that you have this whole new genre which is really interesting. I’m sure this topic comes up in every interviews but I’ve once heard you described as ‘math rock’, what is that?

Michael: Well, I think there’s a bit of that in what we do

Alex: It’s complex intertwining rhythms between sheets but I wouldn’t say we’re that much at all anymore.

Michael: People say that we’ve never played in four/four (which is the normal time signature) but all of the songs are in four/four?

Alex: I think it’s just Mikey’s verse and that’s about as Math as it gets, but even that’s four/four.

Michael: But yes, we are very twisty and turny so I can see why people might say that.

Could you put one word to your genre, not a name but a word?

Okay so yes I did some nerdy research but I’ve read that Paul Lester, a critic, said that you sound like ‘a riot in a melody factory’ and I thought that was quite appropriate?

Michael: Yeah I think that was after the second album and melody was something that we talked about a lot. I think a lot of bands shy away from melody because it could be quite cheesy if you have a big, strong melody but we wanted it.

So you guys use a lot of laptops and synthesised noises right? When you make your songs, do you generally have an idea of what you want the song to sound like or do you start on something small and then build on that?

Michael: Sometimes Jon tries to write something in a particular style; Radiant on the new album was meant to be a bit like Streets of Philadelphia by Bruce Springsteen  which it doesn’t sound anything like but that’s what he was trying to go for- tempo wise and all that lot. He thinks about tempo quite a lot. So what you actually end up is normally quite different from what you aim for but yeah, sometimes the idea in that way.

So it sounds like Jon is the main one who drives the music? I know he went to university to study music but what did you guys do?

Michael: He met Jeremy at Salford, I went to Leeds college of music which is part of Leeds University.

Alex: I went to art college and studied fine art.

Alex: Not sounding like a d**k, I just didn’t really feel the need to go to a music course when I’d studied classical music all my life.

Michael: I did jazz; there was no way I was going to do a popular degree but they did haha. In fairness they did more about recording which is quite useful.

Michael: Bit of both. I suppose that you always want to do as much as you can with something but you can tell a mile off with some bands if they’re like ‘we are going to make this work no matter what’, but it wasn’t like that for us. We wanted to do it because we wanted to do it so our intentions were pure but of course, as it gets bigger- you want more people to hear about you and stuff.

Michael: Not sure really…

Alex: I think that was Jon.

Michael: Yeah well he asked us to be in the band – it was his idea so… It’s meant to be about hopefulness and the idea that anything can happen. But it was a long time ago.

Alex: Stuck with it now

Are you guys all really close, do you live together?

Michael: We don’t live together no, but we see a hell of a lot of each other.

Alex: I see more of these guys than I do my own friends, family, girlfriends.

Yeah I’m not surprised. Okay so you’ve just released Arc, but do you have anything new coming up?

Alex: We’re writing at the moment yeah. Hopefully try to get some new stuff done, start thinking about next year.

I look forward to it! And about tonight – do you ever get drunk before you go onstage?

Michael: Haha not drunk- but it’s sometimes good just to have one drink. Although we definitely have been drunk, but that’s not really a good idea, especially if you’re the drummer.

Do you ever make mistakes on stage?

Michael: Mistakes? Yeah, all the time. We just bamboozle everyone with stupid music so they never really realise.

Alex: We went on stage with snow patrol once…

Michael: [Laughs] yeah this is a good one…

Alex: It was a homecoming gig for Michael so all his family were there, a completely full arena. We all had our in-ears (our monitors) on. Everything we need to play is sent to these ears by these paddles and it gets transmitted by radio frequency. And uh, our sound engineer forgot to plug the paddles in.

Michael: So we just heard ‘cccchhhhhhh’. Walked on stage, were like ‘uhhhh’

Alex: There were 50,000 people there waiting and Mike was there behind his drum kit going ‘It’s not fucking working!”

Michael: [Laughing] Hopefully there’s not too many mistakes like that tonight.

Hopefully – I’m sure it’ll be good

Michael: Are you going to watch it?

Both Michael and Alex: Go watch Queens of the Stone Age.

Alex: You can see us any old time hahah