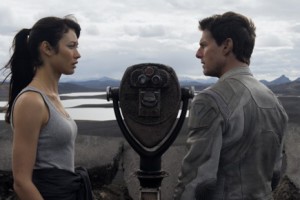 Tom Cruise and Andrea Riseborough star as a couple/team tasked with maintaining security drones in a post nuclear fallout future with the promise from the higher-ups that they will soon join the rest of civilisation on an off-world colony. Much of their day-to-day protocol is outlined in detail, from fixing crashed drones to avoiding alien scavengers, but of course nothing is as it first seems.

The story is well paced and the gradual reveals toward the bigger picture serve the story well, keeping the plot moving and the interest high.

Tom Cruise (despite being over 50) still plays the action hero everyman well and despite never being able to escape just being ‘Tom Cruise’ in most of his films, is good in the role of maintenance worker Jack haunted by dreams of a past life. The standout though is Riseborough, in the role of his partner and workmate Vicka, who is great at playing both capable and emotionally wounded convincingly in equal measure.

It’s certain that the characters (and there are other surprise appearances later on) could have been fleshed out a little more – but with Kosinsky spending much of his efforts on the production values, it shows – the film is visually stunning. Despite being barren, the wasteland is beautiful and the best moments of the film come from its exploration.

Similarly the technology, weapons, vehicles and architecture have a great design and cohesive look to them. If Apple made guns and bikes they would probably look like this. The sound design is also impressive – the drones’ blaring in particular – something that anthropomorphises them and helps make them story characters in their own right. The score also deserves a mention, with soaring orchestrations courtesy of Joseph Trapanese (who worked with Daft Punk for the memorable TRON: Legacy score), this time collaborating with Anthony Gonzalez of electro-pop band M83.

Without giving too much away, thematically this film has everything you want from a good sci-fi. It’s about protocol and questioning one’s role and existence (much like 2009’s excellent Moon); the yearning for humanity, conflicting ideologies and information control. It’s light on huge battle scenes but makes you think instead.

There is nothing too groundbreaking here, but it’s solid stuff nonetheless. Recommended.

Oblivion is now available to rent and buy on DVD and Blu-Ray.