BLUES-LOVING London boy Marcus Bonfanti is laughing on the other end of the phone, sharing memories of this year’s Glastonbury with me and making promises he’s blatantly never going to keep.

We’re both confessing a deep-rooted hatred of festival camping, and he’s making all sorts of statements about when he hits the big time. “If I ever get a tour bus and all the VIP treatment, you can come along with us and do it properly,” he tells me. Words I’m definitely going to hold him to.

Marcus, 29, is getting ready for his first headline tour in November and a third album – following in the footsteps of his first two releases, Hard Times and What Good Am I To You?

“I play music rooted in the blues, but it’s not what most people would consider blues music. We call it swamp blues. A little bit more gritty and a bit nastier. There’s bits of rock and soul and country music in there as well. Just trying to play the blues and do something slightly different with it.”

He headed to Glasto (highlight Fisherman’s Friends – ten old boys singing sea shanties) with his mate Paddy, but they both thought each other was bringing a tent and ended up homeless. Luckily they had mates on the blues scene that could help them out. Not that they actually slept.

“I’m a bigger fan of staying up all night than staying in a tent,” he confesses. Tres rock n’ roll indeed.

Headlining the blues stage this year, Marcus and his band played to around five thousand people all trying to squeeze into a two thousand capacity tent.

“It was unreal. It was just great to see a lot of young people there losing themselves to blues music. It just goes to show – some people think blues music is a dying genre, and no one’s doing anything new. I don’t think that’s true at all. After Glastonbury, there’s a lot of us doing something new with it. It gave me a lot of faith in what I do.”

“And also there was a really good party afterwards. I was there for about three days and I had about an hour’s sleep between the three of them.”

Clueless about chart music, with one pop concession, (“I like the new Adele record. I think she’s got one of the greatest voices I’ve heard in years. If pop music sounds like that, I could get into that,” he says),  Marcus is totally emersed in the touring music scene. So what are his main influences?

“It changes week to week. I’m always listening to Tom Waits, Muddy Waters, Howlin’ Wolf and The Beatles – that sort of goes without saying – everyone listens to The Beatles. And all the usual guitar players as well, Stevie Ray Vaughan and Jimi Hendrix. One of the biggest influences was Led Zeppelin. They showed me where the blues was at. I heard Led Zepplin IV for the first time and then had to work out how that sound happened, and then work backwards. When I was about 16 I had that. That’s when I picked up the guitar.” 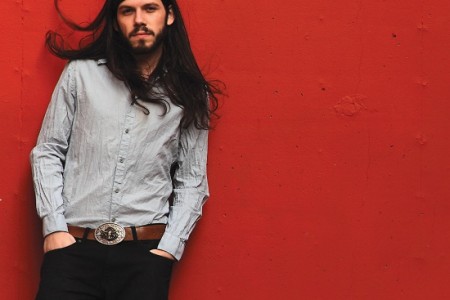 Growing up in London, and then living a nomadic life as a session guitarist, bunking down on buses and vans and a stint shacked up in Liverpool, Marcus decided to quit playing on other people’s records full-time and started on his own album, Hard Times, released in 2009.

“I did my first record in my mate’s front room in Chiswick. I was producing his girlfriend’s album and playing some guitar on her record. For every day I’d do with her, he’d give me a free day in his studio to do my album. I managed to plan it really well that her album took exactly the amount of days I needed to do my one.”

“I was so broke that I couldn’t actually afford to pay anyone to play on my record and also I didn’t really know that many people in London I had to do it myself. I had to learn the instrument so I could play them on the record. It’s got a very stripped down feel. The second record I had a slightly bigger budget as I was on a label. We recorded it live, everyone in the room together and put the little bits of sparkle on afterwards.”

And what can we expect from the new record? “When it gets heavier, it gets a lot heavier and when it gets quieter it gets quieter. That’s the only way I can describe it. I’m a big fan of that, if we’re gonna make a point and do something heavy, why not make it the heaviest thing we can do? There’s going to be a couple of guests on there. My friend Paddy Milner who’s an amazing New Orleans boogie player and a great British harmonica player called Jake Field is going to come and guest as well so it’s going to be a good sound I hope.”

Not content with just playing his own music, Marcus is also in a band called Saint Jude, which he describes as a mix of Led Zeppelin and the Stones.

“The lead singer Lynne Jackaman is one of the most incredible singers I’ve ever heard in my life. Lynne doesn’t sound like anyone I’ve ever heard. It’s amazing. And it helps that she’s quite nice looking as well. That means that the front two rows of our gigs are usually blokes. That’s not good for us male guitar players, but good for our audience attendance!”

And as for the future? “I’d just like to be able to live my life between my life, Saint Jude and a few other projects I’ve got on the go,” he tells me.

“Ever since I got into music I always hoped that every day of my life would be playing music and now I’ve got there, I just really enjoy it. You’ve got to take music out to people, and if people are going to show their faith and spend a bit of money to see a show, I wanna be there and play that show. Life’s too short, innit.”

“I love being on the road with my friends as well. It’s just brilliant.”