CONGRATULATIONS to hit-maker Beyonce Knowles and her talented husband Jay-Z who have confirmed that they are expecting their first child.

The Single Ladies singer chose to announce the news at the MTV Video Music Awards in Los Angeles in the early hours of Monday morning (UK).

She posed in a beautiful floor length red dress, holding her baby bump.

MTV tweeted: “OMG Beyonce just made a huge announcement on the #vma carpet! #baby!!!!!” and posted a Twitpic with the evidence.

The news has also been given the nod by her rep.

Beyonce and Jay-Z are a notoriously private, power couple with scores of huge hits between them.

They collaborated on dance floor fillers DeJa Vu and Crazy In Love.

Beyonce was part of R&B supergroup Destiny’s Child, whose hits include Bootylicious, Say My Name, Independent Women Part 1 and Survivor, and then went on to have incredible solo success.

She teamed up with Lady GaGa for their chart hit Telephone and a re-working of Bey’s track Videophone.

Her other solo hits include Best Thing I Never Had, Run The World (Girls), Sweet Dreams, Halo and Beautiful Liar (with Shakira). 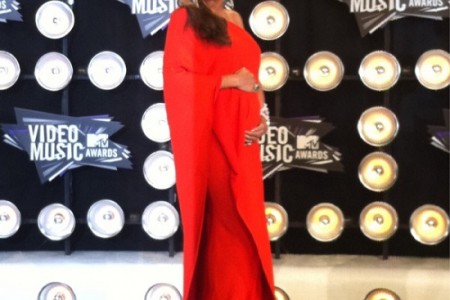