MEETING someone online is no longer a taboo – but how do you decide which dating event is perfect for you? Well, when there’s the option of having a first date at 435 feet in the air, I think you’ve found a winner.

That’s exactly what happened on the Wheel of Date – run by quirky matchmaking site DoingSomething.co.uk.

Just under 500 singles were packed into one rotation of the London Eye, and each pod was taken over by a different cool London event – so you could play ping pong (cheers Cafe Kick!), sing karaoke (arigato Lucky Voice), cradle a bunny in a mini petting zoo (hurrah for Hackney City Farm), or even get ‘hitched’ in the wedding-themed capsule (wow, now that’s some first date!). Check out the full run down of themes which are listed at the end of the feature. 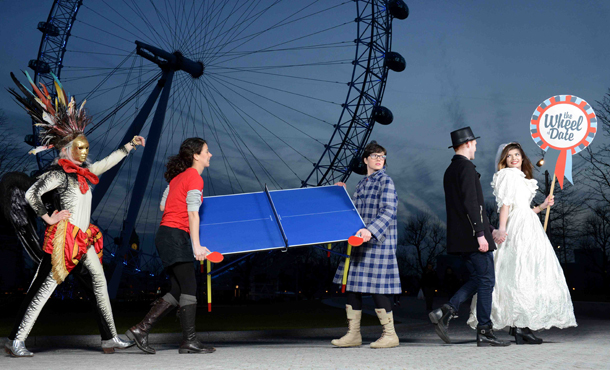 DoingSomething.co.uk and Time Out, who co-curated the event, invited Pillow Magazine to come along and check out the evening’s activities and we were whisked away to Casablanca in our pod, thanks to immersive film experts Future Cinema.

After we gingerly entered the capsule, not knowing what to expect, we were greeted by actors dressed as Moroccans and given props to put on to help break the ice.

Laughing and feeling totally relaxed thanks to the activities, I donned a hat and then turned to the person next to me to help him into his costume – a white cheesecloth top – which looked more like a dress.

We were then put into pairs and lubricated with a chilled glass of gin and tonic and fed delicious baklava and chocolates.

Everyone was chatting away and we had a very sociable group as we went around the full rotation of the London Eye.

Indeed, upon comparing experiences later in the evening, many were jealous of our experience scoffing Moroccan treats, and found some of their pods to be less sociable than our top notch experience. 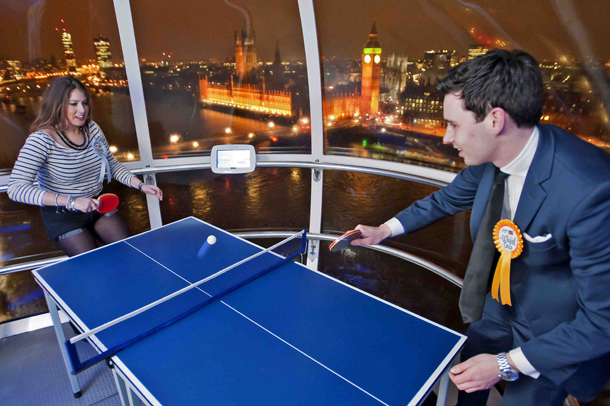 Afterwards, we fought through the bitter cold air back to the Old Vic Tunnels (which are absolutely bloody amazing) where we warmed up thanks to mulled wine and got chatting to the others Wheel of Daters.

“It was a great experience, but I wish I had dragged a mate along,” one fellow attendee told me. It was a sentiment shared with a few other lone wolves who had bought tickets by themselves.

“I had a really great time on the London Eye,” enthused another, “but it’s hard to get to know people, as they are in groups.”

Maybe there was also a curse of being in a room full of 500 very good looking single folk. There was a lot of ‘scanning’ of the room, and not a lot of number-exchanging going on.

“We’re all equals, I don’t know why people are staying in their cliques,” an off-duty photographer later added to me.

However, as everyone who spent £50 on a ticket for the Wheel of Date received three months’ membership to the dating site where you suggest fun things to do, and meet via a shared experience, I was confident that there would be a lot of contact post-the actual event.

The night was young still though and the drinks were flowing (although the Old Vic Tunnels ran out of gin early doors). A drag show took to the stage, followed by a theatrical performance which the crowd gathered to watch. Karaoke was going on in the back room. 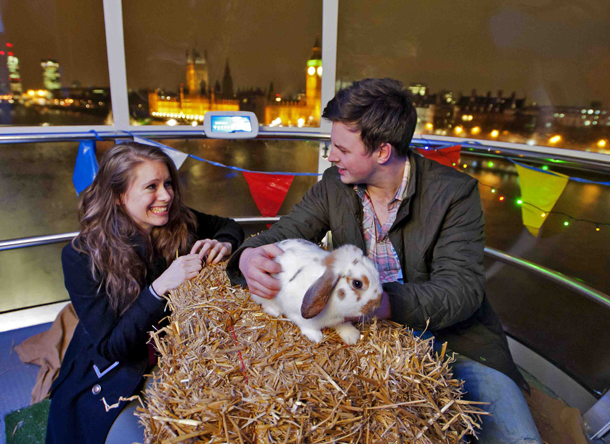 But it was time for team Pillow Mag to depart, leaving the rest of the crowd to get to know each other a little more intimately.

DoingSomething.co.uk CEO Matt Janes said: “Transforming each capsule on London’s most iconic landmark into a different date was a pretty ambitious task but we’ve had the best time pulling it off.

“It was a brilliant night and our sentiments were echoed by the 500 singletons who got involved.”

THE FULL RUN DOWN OF WHEEL OF DATE, DATES

● BUNNIES ON BOARD – Hackney City farm allowed daters to bond over bunnies in its petting zoo capsule.

● KARAOKE – Lucky Voice provided microphones and London inspired playlists for its karaoke capsule and wannabes had the chance to sing with their very own Ukulele backing bands.

● STAND UP – The Comedy Store hosted stand up gigs in their capsules, giving daters the chance to laugh off those first date jitters.

● ALTERNATIVE NIGHTLIFE – The Black Cat Cabaret and Musical Bingo with Jess Indeedy hosted the best in cabaret and alternative nightlife.

● LIFE DRAWING – Shoreditch hang out The Book Club gave singletons a real ‘eyeful’ through a life drawing class, all in the best possible taste of course…

● WEDDING THEME – This heavenly ceremony provided the opportunity for singletons to get on single, and hop off ‘married’.