STEPTOE and Son – two men, two world wars and two lives knitted together as tight as a thrice darned sock.

The acclaimed Kneehigh theatre company returns to the Lyric Hammersmith this March to present the London premiere of Steptoe and Son; a darkly comic and deeply moving re-imagining of a twentieth century icon.

Adapted and directed by Emma Rice from the original scripts of Ray Galton and Alan Simpson, this new production charts the tender, cruel and surprising dance between father and son. Rice, who has been Kneehigh’s artistic director since 1994, has been a vital driving force in the company’s success over the past two decades.

Taking on the roles of one of television’s most famous pairings are Kneehigh founder Mike Shepherd playing dirty old rag and bone man Albert, and Dean Nolan (Surfing Tommies, Iron Shoes) as dreamer Harold. Completing the cast is RSC and Kneehigh regular Kirsty Woodward (The Way of the World, Sheffield Crucible).

The acclaimed Cornish Kneehigh theatre company are known for their invigorating theatre experiences. One of Briton’s most exciting companies, they have been together for 30 years now, and have exhilarated audiences with their electrifying, impassioned productions. Steptoe and Son is described by Kneehigh as “a show for anyone who has had a parent, anyone who has had a child, anyone who has wanted to tear the walls down and run across the fields naked.” 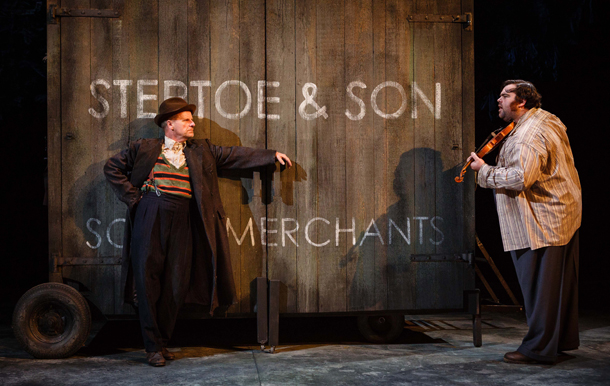 If Kneehigh’s previous productions are anything to go by, Steptoe and Son is just as likely to make you roar with laughter as it is to turn you into a blubbering mess.

The Civil Wars Are AMAZING! Listen To Their D…