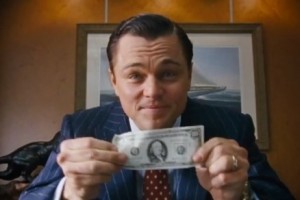 MARTIN Scorsese’s The Wolf of Wall Street is a film that can be summed up in one word: Excess. It’s 3hrs of people accruing (and spending) an obscene amount of wealth with extended scenes of drug taking, sex and hedonistic debauchery peppered throughout. Your enjoyment of it all will really comes down to whether or not that can hold your interest for the duration.

There is no doubt that Scorcese is a director of many talents and its refreshing to see him handle something different here: comedy – albeit with a dark streak a mile wide running through it. Whether it’s scenes of Jordan Belfort’s enthusiastic employees foaming at the mouth during one of his motivational speeches or the various drug-fuelled hijinks that make your jaw drop in disbelief – it’s frequently amusing with its ballsy and often shocking humour.

In lesser hands, the material could have fallen flat (after all, it’s a tough act to get an audience to empathise with characters as unsavoury as these) and yet the majority of the film manages to remain compelling due to both Scorsese’s directorial flair and excellent performances all round from the cast.

The mismatch of styles that seemingly come and go as they please (voiceover narration, speaking directly to the camera, hearing character’s thoughts out aloud, improvised dialogue scenes) would usually result in an uneven and jarring experience, but here Scorsese makes them all work together. The Wolf of Wall Street is about not giving a damn, just doing it anyway and the art of selling you something (that you didn’t want in the first place) via slick motivational BS-ing – so its fitting that the themes of the film are subsequently mirrored by its presentation.

The performances are a standout too. Leonardo Di Caprio goes the full hog in the lead role, remaining a charismatic and magnetic presence throughout the film despite playing such an intensely unpleasant character. Imagine if Gatsby had spiralled out of control, if you will. Watch as he rants at length clutching a microphone addressing his whole office floor, argues with his wife or flops about on the floor uncontrollably during the extended (and much talked about) ‘lemons’ sequence. He is an actor at the height of his career.

Elsewhere, Jonah Hill is consistently obnoxious as partner-in-crime Donnie, a gaunt looking Matthew McConaughey steals his scene as an unscrupulous Broker who ‘educates’ Jordan; and Kyle Chandler puts in a dignified and understated performance as FBI agent Denham.

The film is full of great characters and performances – it’s just a shame that there isn’t a bit more to the story. There’s no real indictment of any of the character’s behaviour or much moralising present at all in this portrayal of greed and addiction. That’s kind of the point of the movie – not to judge – but the constant scenes of excess does make it a little exhausting to watch, especially given the lengthy running time.

Quite a few people will love it (simply by virtue of not having seen anything like it before – and quite rightly so) but in terms of satisfying entertainment it comes up a little short. What makes it a fascinating is that it’s based on a true story (Jordan Belfort himself cameos in the final scene). Scorsese is a masterful director, no doubt. Just approach with caution – this movie may not be what you think.

The Film Review: Dawn of the Planet of the Ap…

The Film Review: Edge of Tomorrow