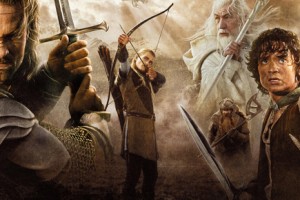 TO celebrate the upcoming release of The Hobbit: The Desolation of Smaug, we take a quick look back at the other films in the series to see how they measure up today.

The one that kicked it all off, The Fellowship of the Ring still looks pretty good considering it was released over 12 years ago. With plenty of stunning vistas (fly over shots of the snow-capped mountains of New Zealand, the first time the group arrive in Rivendale and the endless green of The Shire all come to mind), the film still looks incredible – especially on Blu-Ray.

Although Elijah Wood, Sir Ian McKellen and Sean Bean were already fairly well known actors, this film literally made stars of Viggo Mortensen and Orlando Bloom overnight, and the scenes of the Fellowship all travelling together in a group are among the best in the trilogy.

Highlights include the battle in the Mines of Moria, the encounter with the Balrog and the final showdown with Lurtz, the ruthless Uruk Hai leader. The skirmishes were brutal and surprisingly bloody and with characters such as Boromir (and seemingly Gandalf) getting killed off, there was a real sense of threat and danger on their journey that is somewhat lacking from the other films.

There were also downright scary moments – being hunted by the Ring Wraiths and Bilbo reaching for the ring in Rivendell. Let’s not forget as well, hearing Howard Shore’s beautiful and memorable score for the first time.
The standout film of the series.

Now that the story and setting had been established, we get to dive right back into the adventure. As the Fellowship have split to journey on in their separate ways, the film lacks the group dynamic and camaraderie that made the first so appealing. However, newly introduced characters such as those of Rohan (Theodin, Eomir, Eowyn and Grima Wormtongue) make up for this and offer an insight into the wider ramifications of Sauron’s growing influence over the land.

And let’s not forget the introduction of Gollum. Glimpsed only fleetingly in the first film, in The Two Towers he makes an appearance as a fully-fledged character, brought to life with awesome CG effects coupled with the remarkable physical and vocal performance of Andy Serkis. The character is so iconic that even those who have never seen any of theses films probably still know who Gollum is; such is his now deep embedding in popular culture.

Although seemingly lacking in battles during the film (only the warg attack mid way through comes to mind), we get the awesome set piece that is the Battle of Helm’s Deep at the climax of the film. It’s dark, rainy and the orcs terrifying in numbers. The final movie of the trilogy may have had bigger battles but none so memorable as this relentless moody (and muddy) siege.

The final part of the trilogy was just as successful as the others in terms of delivering epic scenes, but also served as the conclusion to the whole story by destroying the One Ring and saying farewell to all the characters.
Despite winning the most Oscars of the trilogy, the film is my least favourite of the three as the ending is simply too long, with the goodbye scenes of each character seemingly dragging on one after another.

On the plus side though we get more Gollum, the terrifying and grotesque Shelob sequences, Aragorn’s rousing speech to his troops as well as the final battles of Minas Tirith and at the Black Gate. Although these were bigger in terms of scale and sheer spectacle (Olyphants trampling everything in their path!), they aren’t nearly as memorable or threatening as the advancing hordes of Helm’s Deep in The Two Towers.

The Return of the King is still a very good movie – just not quite as satisfying as the first two entries. And let’s face it – all those ending scenes could have been trimmed down just a little.

The Hobbit: An Unexpected Journey (2012)

Almost a decade later and after a few false starts with an alternative director, Peter Jackson finally agreed and set to work on The Hobbit. Despite being generally well received by fans, stretching the contents of a slim book into a trilogy of films meant that a lot of the scenes seemed unnecessarily drawn out (it’s about 45mins before they even leave The Shire this time!) and the addition of extra bits of Tolkein’s writings (Radaghast and Dol Goldur in particular) filled in the other gaps.

The tone of the movie is a little muddled too. On one hand it attempts to emulate the brutal battle scenes of the first (there are beheadings and limbs getting lopped off) but at the same time, its undeniably more child-friendly – with many of the dwarves providing slapstick comedy moments as well as the appearance of a rabbit-powered sled.

Whilst there are a few action set pieces (the encounter with the three trolls and the escape from the Goblin King stand out) the abundance of CG over practical effects and the fact that no one ever really gets hurt (characters tumbling down a ravine on a wrecked bridge just to dust themselves off and keep going) lends a more cartoony feel to the whole affair. It’s also kind of jarring to see characters such as Gandalf, Saruman and Elrond look older than they did in the LOTR Trilogy (despite this being set before those films), but that’s just nitpicking.

Besides, we have another standout Gollum performance from Serkis in the Riddles in the Dark segment, a pitch perfect Martin Freeman as Bilbo Baggins and the tease to the appearance of Smaug in the next film – all enough to make us look forward to the next in eager anticipation.

It’s also worth noting the new technology employed in the screening of these films – namely 3D and HFR (High Frame Rate) formats, can greatly enhance or mar the experience (depending on which side of the fence you sit on in regards to that sort of thing) – but at least there is always a choice for which screening you want to attend.

Although there were a few animated adaptations of the LOTR and The Hobbit books, the one that is most fondly remembered is the 1978 animated movie directed by Ralph Bakshi (Fire and Ice) and produced by Saul Zaentz (The English Patient).

Originally conceived as a three film series, it was later shrunk down to two and then, unfortunately due to studio troubles, the second half was never made – leaving us with only half the story (actually it ends at the conclusion of The Two Towers so technically it’s two thirds of the story).

The rotoscoped animation still looks impressive (those ring wraiths are creepy!) and it features John Hurt as the voice of Aragorn.

Peter Jackson was undoubtedly heavily influenced by this version, with a few shots in his own films lifted directly from here. Without this version we may not even have had the recent live action versions, or at least not in the way that they turned out.

Worth searching out if you are a fan.

The Hobbit: The Desolation of Smaug is released nationwide on Friday, December 13th. Be sure to check back at Pillow Magazine for the full review!