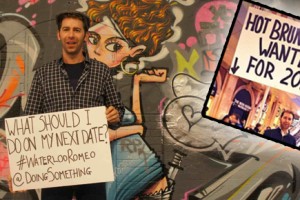 WE all know that when it comes to dating in your 30s, whether down the pub or online – it’s a jungle out there.

And if you found yourself single and available on New Year’s Day (a snog on New Year’s Eve doesn’t count) then finding a regular squeeze may be on your ‘to-do’ list for 2014.

It was clearly on the resolution list for Gerald Abrahams, 39, better known now as Waterloo Romeo.

Rather than set up a boring internet profile begging for a date, the landscape gardener stood outside Waterloo station in London, brandishing a home made placard reading “Hot brunette wanted for 2014″.

You can’t deny that it’s a novel idea when you are looking for love. 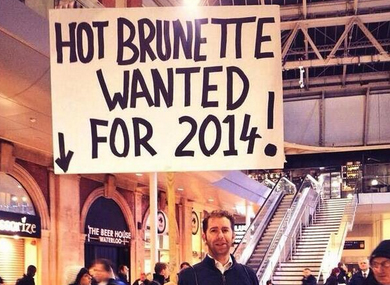 And as well as catching the eye of several ladies, it got the attention of alternative dating site DoingSomething.co.uk.

They helped set up Gerald with PR Consultant Emma, 27, to go pizza making (yum), rock-climbing and sent them on a tour of London. 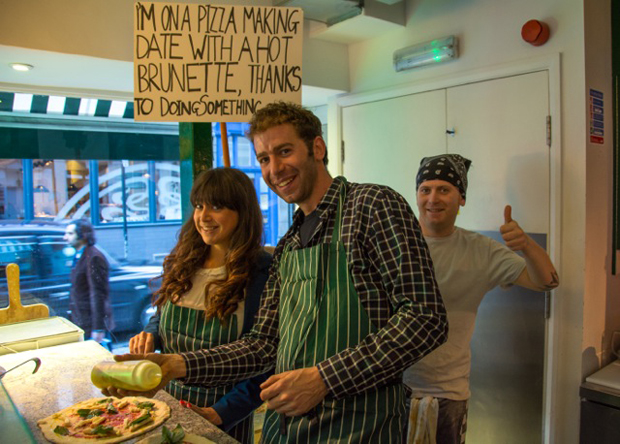 Matt Janes said: “Dating’s more fun when you’re doing an activity. It’s just a much more natural – and fun! – way of getting to know each someone new. When we heard about this hapless chap, we were determined to make sure he went on the best dates out there.”

And talking about being ‘adopted’ by DoingSomething, Gerald said: “It’s so much better than traditional internet dating which gets stale – it was more fun and Emma was a great girl and up for a laugh – it’s not every day you someone who’s up for a rock climbing date. Fantastic concept.”

Placards at the ready, boys?

Revealed: What women REALLY think of their ma…