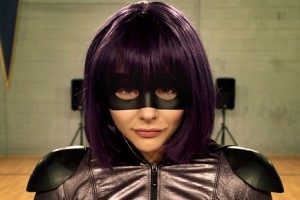 FOLLOWING on three years later from the original Kick-Ass, Kick-Ass 2 plays out as a very logical sequel.

The characters are all older (but not necessarily wiser), and the story presented is a direct result of the events of the first film.

Mindy Macready AKA Hit-Girl (Chloe Grace Moretz) is being told repeatedly that she needs to be a normal high-schooler now, Chris D’Amico (Christopher Mintz-Plasse) is plotting revenge against Kick-Ass for the death of his father; and Dave Lizewski AKA Kick-Ass (Aaron Taylor-Johnson) decides to join a team of costumed vigilantes.

And that’s where we first start to run into problems. As a sequel, naturally everything is bigger and bolder, but with so many characters in the fray this time, many get severely sidelined – unfortunately even Kick-Ass himself.

The heart of the film lies with Hit-Girl; and a despite a significant portion of the running time playing out as a by-the-numbers high-school comedy, she is easily the most popular character in the franchise and the film is wise to shine the spotlight more on her this time around.

Similarly, a lot of time is spent with wannabe super-villain D’Amico who scraps his ‘Red Mist’ moniker to reinvent himself as (a name that shall not be printed here). As a villain he is almost too likeable, and despite doing some pretty evil things, much of the comedy in this film is derived from his scenes and his attempts to recruit a team of super-villains.

So unfortunately that doesn’t leave much time or development for Kick-Ass himself – most of the time he is just reduced to playing sidekick or foil for the above two characters.

The majority of the new costumed heroes and villains are also not given enough time to be fully fleshed out characters. Of the heroes, an almost unrecognisable Jim Carrey (as Colonel Stars and Stripes) exits earlier than expected and on the villain’s side only the gargantuan Mother Russia gets worthwhile scenes. Promises are made and then quickly broken a few scenes later. A late game betrayal is seemingly glossed over. The film lurches in tone from one moment to the next. It just seems that they have tried to fit way too much in.

There is enough crude humour to keep audiences laughing throughout, but what the film really lacks is a good amount of heart – something that 1999’s Mystery Men did very well with its tale of similarly inept self-styled costumed vigilantes. You really cared about them. Here, nearly everyone (bar Hit-Girl) seems to be the butt of a joke. Even the original film managed some warmth with the relationship between Hit-Girl and her father Big Daddy.
The first film’s origin story played out like an anti-superhero film and was a surprise hit because of it. Kick Ass 2 isn’t afforded this luxury and as such seems overcrowded, overlong and unfocused. It does retain the crude humour and brutal violence of the first film however, and (as a treat for UK fans) features many British actors pretending to be American, as well as squeezing in a fun dig at One Direction-alike boy band Union J.

Entertaining, but certainly not as solid as it’s predecessor.