CYCLING along in the sunshine and the wind is whipping through my hair, my pulse is racing, my legs are pumping… it’s time for a sangria break.

Twisting the frame, we whizz up a short hill into a cafe, lock the bikes and take seats at a table on the terrace in the sunshine.

Ordering a big jug of spanish nectar, followed by gin and tonics and tapas I drink in the view – green hills and mountains, ready for a tipple.

OK, so we may have only been on the bikes for two minutes (literally) but when on holiday, every hour is happy hour.

My boyfriend and I had just set off from the gorgeous grounds of Hotel Son Ametler, a boutique hotel located near the town of Inca in the rolling hills of northern Majorca.

We’re staying between that hotel and sister hotel Finca Es Castell for a few days break from London.

And when it comes to taking a few days away from England, the Balearic Island of Majorca is absolutely perfect.

Avoid Magaluf, and head to the hills for a few days of uninterrupted peace.

There’s nothing better than listening to absolute silence and watching the stars slowly appear at night.

Flights can be as little as £100 return each from easyJet and the journey only lasts about 2 hours – about enough time to watch a film and sink a couple of gin and tonics.

Cycling is big business here, with large groups taking to two wheels and taking advantage of the excellent road conditions. 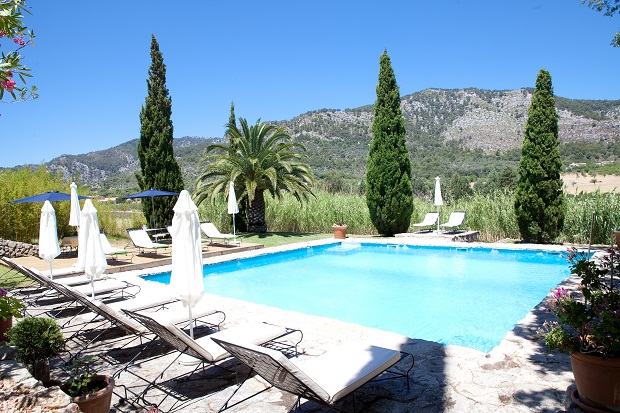 However, as I’m not the best at cycling we ditch the bikes after a couple of hours roaming the region and take advantage of the beautiful grounds of Son Ametler.

The hotel has a huge (and I mean huge) pool, rambling grounds, eight rooms (four with balconies). It’s hidden away from any hustle and bustle and feels very secluded and isolated while only being a short walk away from the village of Selva.

I didn’t go for a dip as despite the 23 degree weather, as the water hadn’t quite warmed up yet.

Breakfast is laid on each morning (and it’s AMAZING) and three nights a week the hotel puts on an impeccable three-course meal. The menu is set, and selected by the chef (but they can cater for allergies or preferences) which was fabulous for showcasing the local produce. 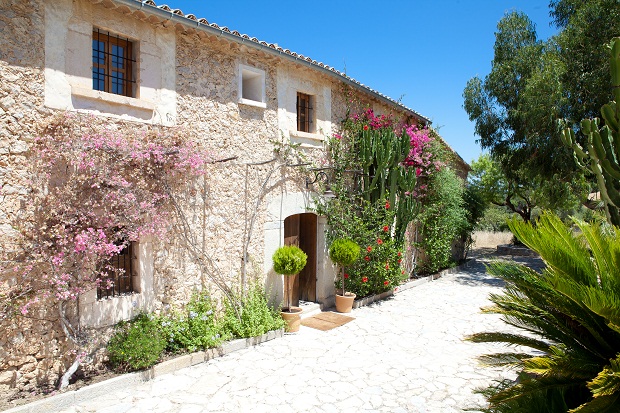 Over at Finca Es Castell, we were treated to a large room complete with white robes, sunken jacuzzi bath, power shower and a private terrace.

Getting up at 7am each morning was a choice rather than a chore as we headed up to watch the sun hit the rolling hills, nursing a coffee.

It’s an idyllic hideaway. The boutique hotel’s owner James Hiscock is warm, friendly and has a wonderful team who can cater to your every need. There’s a bar, and an honesty bar (where you record what you have taken) for refreshments throughout the day.

Here they serve a four-course meal every night, excluding Sundays. The food was outrageously good.

The quality of the food (and the lure of ice-cream) might be why an antidote of long bike rides and walks are also on the menu.

But when the landscape is as pretty, interesting and beautiful as it is in Majorca (as well as the promise of sangria breaks) it’s an appetising prospect.

EasyJet flys to Palma from £100 return.

Double rooms with a terrace at Hotel Son Ametler are available from €145.

Double rooms at Finca Es Castell are available from €130.00.

Airport transfers can be arranged through the hotel, price on application.

Brighton and the bargain Bugaboo

The beach, a book and a bloomin’ big cocktail…

London – you may be our fave fashion capital,…